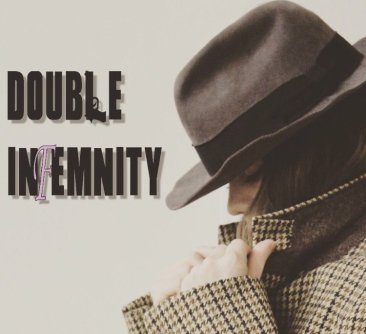 The genre of ‘noir’ or ‘film noir’ has over the decades acquired many fans with its grey-tinged world of morality and the private detective as protagonist of choice. As for women’s place in this genre, most are regulated to the roles of femme fatales, ‘Girl Fridays’ or the ‘morally compromised’. In Double Infemnity, these tropes are deliberately reversed.

Starring Katrina Foster, Double Infemnity explores amongst other things Effie-Lou working in law enforcement in a virtually all-male environment – much like Marvel’s Agent Carter. Tracking down her oldest friend who she knew from the days she was in care, her police partner ‘Brad’ (who is a bit of a ‘himbo’) tags along. Using film footage of Brad Pitt to represent him, it becomes a running joke throughout.

While the usual noir tropes exist here too, they are given a female perspective, which makes for an interesting contrast. Effie-Lou’s ‘past’ mirrors the fate of the women she meets, which not only allows empathy for them, they gladly confide in her. As for ‘Ms. Beehive’, the contrast between Effie-Lou and her opens up a lot of questions about women supporting each other (or not) in the workplace and the dangers that female rivalry brings. All-in-all, an interesting deconstruction of noir‘s tropes through the prism of gender.

Double Infemnity runs at the Vaults Festival until 4th February.