I’m every woman, it’s all in me
Anything you want done, baby, I’ll do it naturally (Chaka Khan) 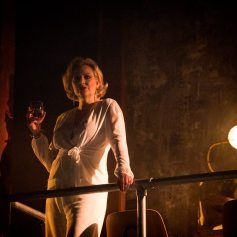 Back in 1967, a spoof version of Casino Royale featured several characters who all went by the name of ‘James Bond’. Their looks and personalities, however, were all very different. Similarly, in Jen Silverman’s play Collective Rage: A Play in 5 Betties, there are five characters who all have the same name, but different as can be. As it happens, there are more variations of the name ‘Elizabeth’ than any other female name in the English language (Betty, Betsy, Bessie, Beth, Liz, Lisa, Betsy, Isabel and so on). The most important thing: despite any similarities, no two women are alike.

Directed by Charlie Parham, Collective Rage isn’t ‘naturalistic’. Indeed, there are many examples in the play that could be described as Brechtian (narration announcing the different scenes, meta-references that remind the audience of the ‘unreality’ of the play, etc). This, however, is far from detrimental, as the play has concentric layers of meaning.

Set in New York, the play opens with Betty #1 (Sara Stewart) addressing the audience. Rich, full of supressed rage and a dab hand at quickfire banter, she wouldn’t be out of place in the screwball comedies in the 1930s and ’40s. Unhappy with her husband Richard’s affair, she decides to meet other people to take her mind off things. Cue Betty #2 (Lucy McCormick). In a similar, loveless marriage, but without even the benefit of acquantances or hired help to talk to, Betty #2 is grateful for any company. However, at the behest of others, she’s advised to look at ‘herself’ and like a child who has seen itself for the first time, is endlessly fascinated ‘down there’…

Very different in temperament to the other Betties, Betty #3 (Beatriz Romilly) has no hang-ups with talking about sex and ‘pussies’ in public. However, she’s told that such talk isn’t suitable conversation at a dinner party. “Why not?” “Because we don’t have sex. We’re married.” However, her latest passion which supersedes this is going to the ‘the-ate-ter’, enthralled by latest trip to see ‘Summer Night’s Dream’. 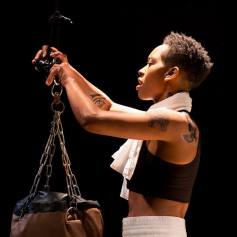 Someone who generally doesn’t have time for acting as ‘culture’ is Betty #4 (Johnnie Fiori). Her passion is her truck and while she and Betty #3 are fairly close, she doesn’t understand what makes the ‘the-ate-ter’ so special. Another of Betty #4’s relationships that’s on rocky ground is with Betty #5 (Genesis Lynea). Having spent some in jail (she liked it) Betty #5’s continues her passion for keeping fit. Previously, Betty #5 has never been one to be too serious about relationships, but Betty #4 senses a difference in her, a person in Betty #4’s life she doesn’t want to talk about…

So what is Collective Rage really about? Dissastisfaction. With relationships. With having no creative outlet. With the ‘identity’ others project onto ourselves. The Rude Mechanicals scene from A Midsummer Night’s Dream, which serves as jumping off point for Betty #3’s play has ‘meta’ written all over it – a play-within-a-play-within-a-play that uses ‘fiction’ to tell the truth. It is within this crucible that the thoughts and desires of the respective characters meet head on.

And even though lesbian relationships and feminism are present within the play, many of the issues such as the yearning to do what make us happy, uncertainty in relationships and the fear of change are all scenarios that are not specific to gender or sexuality. In short, it has a universal relevance. And a very funny play to boot.

Collective Rage: A Play in 5 Betties runs at Southwark Theatre until 17th February.