The first time I became aware of The Hiccup Project was exactly a year ago, when they performed an excerpt of their first show May-We-Go-Round at the Women Centre Stage Festival at Hampstead Theatre. Meshing dance, comedy and music, the show devised by Cristina Mackerron and Chess Dillon-Reams was a breath of fresh air and even now, there are few artists that can pull off what they do. However, the question remained: would they be able to replicate the magic for the perennially difficult second show?

In some ways It’s Okay, I’m Dealing With It ‘does what it says on the tin’ by exploring the disparity between our confident, ‘together’ public selves and what we really feel inside. While there are lots of examples of physical humour such as the Pythonesque ‘knight’ and ‘Viking’ sketch, Dillon-Reams and Mackerron aren’t afraid to share personal anecdotes to illustrate the points made. This gives credence to their assertion of being totally honest and not just discussed as a hypothetical exercise. Sometimes it’s easier to stick to the standard “Fine, thank you” response to avoid any awkwardness or acknowledge how we really feel. 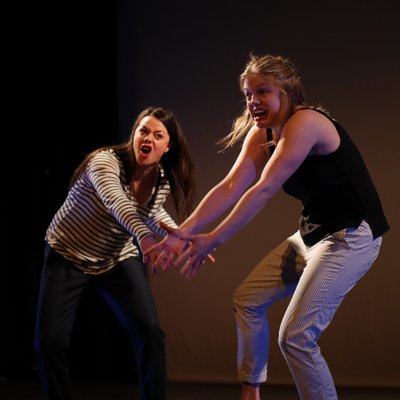 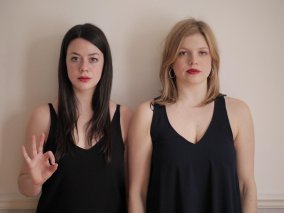 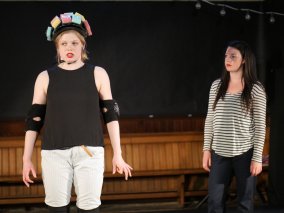 Not that the show dwells excessively on the Sturm und Drang of living. Rather, it acknowledges the absurdities and relentless pressures of life and runs with them – from tea’s panacea qualities when faced with life’s ‘sling and arrows’ to the days that pile misery upon misery, leading to the feeling that one will spontaneously combust.

As for the musical numbers, they come when least expected, but when they do thay are poignant and offer a brief time for reflection amidst the anecdotes, dancing and comedy.

Judging by the sold out venues throughout their tour, the Hiccup Project’s unique way of looking at things has struck a chord with audiences far and wide, a reflection of being able to address the ‘unsayable’ with humour, sensitivity and consummate skill.

It’s Okay I’m Dealing With It ran at Camden People’s Theatre on 18th and 19th November as part of its UK tour. The show will next take place on 25th November at Attenborough Arts Centre in Leicester as part of the Here & Now Festival by Tetrad Collective.