Taking inspiration from Laurel Thatcher Ulrich’s quote that “Well-behaved women seldom make history,” theatre group Glass Splinters have recently devoted an evening to nine monologues about women of historical significance. Not all of them were recognised as such at the time, but with hindsight their experiences and contributions have made a lasting impact on other women and society as a whole.

It has once been said that you don’t meet the ‘real’ person until you see them in their dying moments. This being the case, first two monologues have the distinction of having women who face their mortality head-on. Written and performed by Felicity Huxley-Miners, Ruth Ellis takes its name from the prisoner of the same name who was the last woman to be executed in the United Kingdom. Mindful of the minutes ticking away, Huxley-Miners’ Ellis keeps checking her pocket watch as she recalls the events that led to her shooting David Blakely.

In real life, Blakely was a heavy drinker and prone to violence – his own blows to Ellis on one occasion caused a miscarriage. His infidelity though was the final straw and by her own admission she “was another person” when she tracked him down and shot him in 1955. Huxley-Miners nails her dispassionate, ‘rational’ nature which the powers-that-be interpreted as proof of a calculated mind… of pre-meditated murder. Her calm, matter-of-fact description of events conversely heightens the audience’s anxiety, leading to a ‘sucker punch’ – the details of the hanging itself. Still, as horrific as the events described are, the eventual outcry put an end to capital punishment in the UK…

While the Ellis monologue depicts a woman who stoically faces up to past choices and what’s happening, The Last 10 is in some ways the anithesis of this – the newly wedded Eva Braun and her choice to stay with Adolf Hitler to the end. Written and directed by Julie Marshall, Amelia Sweetland plays the convivial Braun. A socialite by nature, Sweetland’s Braun is apolitical, drawn instead to Hitler’s personal charisma and fame. It dawned on me while watching this particular monologue that Braun here is the mirror image of Fluff Productions’ Pamela Moore, a British socialite at the dawn of the Second World War whose eyes are opened to what’s taking place in Europe.

In any case, Sweetland’s monologue is a reminder that Hitler was by all accounts a ‘charming’ and ‘persuasive’ person on a one-to-one basis – reason enough for Churchill to half-jokingly say he didn’t want to spend time alone with him, just in case… Braun’s unwavering – if misplaced – loyalty and devotion compels her to her fate, much like a Shakespearean figure of tragedy.

The early 20th century saw the inception of vocations that were previously for ‘men only’ opening up to women, especially during the Second World War. In specialised fields such as photography, however, very few women broke through. In Europe, Gerta Pohorylle a.k.a ‘Robert Capa’ and later ‘Gerda Taro’ became the first female photojournalist to cover the front lines of combat (Spanish Civil War) and to die while doing so. Meanwhile, Stateside, Margaret Bourke-White’s growing reputation as a photographer of industry led to her being a photojournalist during the Second World War. Written and performed by Shirley Day, Portrait & Landscape paints a fascinating picture of a woman whose ‘work’ and passion became the same thing. Initially taking photos to ‘make ends meet’, Bourke-White’s discerning eye led her to ever-increasing high-profile jobs.

Day’s ownership of the material shines through and while her delivery was captivating in its own right, the projections of Bourke-White’s work gave the audience an idea of her skill and achievements. From day one, Bourke-White never out of necessity or volition hid the fact that she was a woman. In fact, as Day points out, being an American woman kneeling down to take Josef Stalin’s picture may have been reason why he smiled in one of Bourke-White’s most famous photographs.

Staying on the subject of women in the Arts, A Dance of Two Sisters focuses on the love of dancing. Alexandra Donnachie plays Violette, a girl training to be a ballerina, while her sister Evelyn (Elise Lamb) mimics her, eager to learn everything she does. Like many during the Second World War, circumstances force them to leave Poland and live in London… Lamb, who wrote and co-directs this segment, conveys the joie de vivre that dancing brings and in doing so, gets spotted and invited to join the Sadler’s Wells Ballet Company.

For some women, they are famous for what they are associated with, associations that stem from other people’s perceptions rather than ‘the truth’. Such a conundrum faces ‘Alice’… In She Was Never Lost, Natalie Harper plays Alice Liddell, the inspiration for Alice’s Adventures in Wonderland and its sequel. One of the first thing she address is the 21st century suspicion of the inappropriateness of his ‘relationship’ with Alice and the Liddell family.

Just like his contemporary J.M. Barrie – who struck up a close friendship with the Llewelyn Davies family, the inspiration for the characters in Peter Pan – Caroll was inspired by Alice Liddell. However, it is Liddell in her twilight years who we meet andwho is able to look back and see things with perspective. While not a facsimilie of the girl she was, Liddell points out where her fictional alter ego shares similar traits. What’s most perplexing, emotionally, is being the guest of honour in New York and congratulated for being the ‘inspiration’ of a cultural icon… 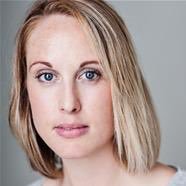 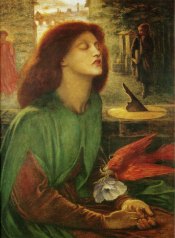 The blurring of the boundaries between being an artistic muse and ‘something more’ is explored in the opening of the second half. The Pre-Raphaelites were a British artistic movement in the 19th century and one of its chief exponents was Dante Gabriel Rossetti. Unfortunately, Rossetti was susceptible to the excesses and ‘appetites’ that are associated with ‘great’ artists and always wanting what he can’t have. A Tale of Two Muses takes place when Jane Burden (Rachel Agustsson) – the betrothed of William Morris – is sitting as a model for Rossetti. However, his recent bride Lizzie Siddell (Amy Allen) who used to model for him and an artist in her own right, knows that Rossetti takes a Wildean attitude to temptation, by yielding to it at every opportunity. As someone who knows what it’s like to be a ‘muse’ and artist, Siddell has a better understanding of the blurring of the boundaries between the observer and the observed…

In terms of autonomy, Cleopatra’s was always compromised by always having to share her power with one other man, whether it was her brother Ptolemy XIII, Julius Caesar or Mark Antony. In Cleopatra Yours Truly, the former Queen of the Nile (Antonia Kleopa) reminisces in 1960s Las Vegas – a place where fortunes are made and lost, and the surrounding desert traps the ghosts of the past… 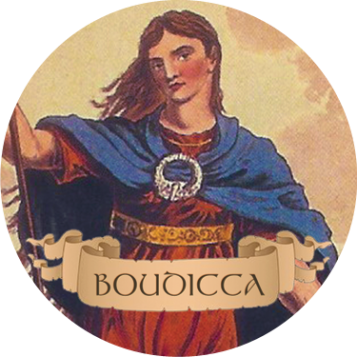 Living approximately 100 years after Cleopatra, but a queen with a very different fate, Boudicca as played by Sarah Lawrie prepares to take on the Romans. Known nowadays as a fearless warrior queen, unlike other figures of British history, the only source we have regarding her are from the Romans themselves. So what was she like really? A female Spartacus? Or a proto-feminist – ignoring the ‘limits’ put on women at that time and personally taking the fight to the patriarchy? The monologue acknowledges the questions regarding her and in its postmodern tone, poses a challenge to “do better” in our assumptions and understanding of the past.

The final monologue of the evening features Claudia Jones, the Carnival Queen. While she may have been “the mother of the Notting Hill Carnival”, the monologue which was written and performed by Tiannah Viechweg shows Jones’ life was so much more important than the final thing she’s remembered for. Born in Trinidad, Jones’ family later moved to New York following the cocoa price crash of 1924. Life in the Depression Era was no bed of roses for Jones – her family being too poor to buy new clothes for her graduation, plus a bout of tuberculosis which would plague her for the rest of her life. 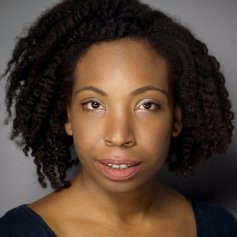 Of all the monologues of the evening, Viechweg’s has the most intersectional relevance to the world today, highlighting the double-edged nature about being a woman of colour – sometimes ignored (e.g. the #MeToo campaign was actually started 10 years ago by activist Tarana Burke) but seen by ‘the Man’ as the political conscience of the black community. Anyway, we find in the monologue that because of Jones’ links to the US Communist Party (a dangerous position to be in McCarthy’s America) she was deported to the UK. There she started the first newspapers for the Windrush generation and of course the Notting Hill Carnival. Longer than some of the other monologues and in rich in detail, Viechweg’s monologue is a labour of love.

Glass Splinters ran at the Pleasance Theatre on 20th November.