Directed by Jorge de Juan, The House of Bernarda Alba is arguably Federico García Lorca’s most well-received play with many, rich female roles. While the play deals with an affluent mother and her daughters in rural Spain, its themes about traditional ideas about women versus what the ‘next generation wants’ makes it universally relevant. As such, its DNA can be found in other female-led plays such as Tracy Letts’ August: Osage County, Muriel Spark’s The Prime of Miss Jean Brodie and Tennessee Williams’ career as a whole.

The play begins with the wake of Bernarda Alba’s husband and as the matriarch, Bernarda (Mary Conlon) strictly enforces an eight-year period of mourning for her family. However, instead of focusing on Bernarda or her daughters from the off, Lorca takes the more interesting route of seeing things from the servants’ perspective. Poncia (Moir Leslie) is approximately the same age as Bernarda and the most forthcoming with information. While she herself watches her P’s & Q’s, she has a degree of confidence and fearlessness that seniority bestows. Criada (Jimena Larraguivel) the younger of the two, is the most affected by the husband’s death. While only mentioned once, her declaration of her love for him and other details suggest that they had ‘more’ than a traditional master/servant relationship and that he was actively interested in women until the end. This is in sharp contrast to Bernarda who has zero interest in the opposite sex and expects her daughters to follow suit. During her marriage, Bernarda was ‘devout’ enough for the pair of them – or indeed her own family. 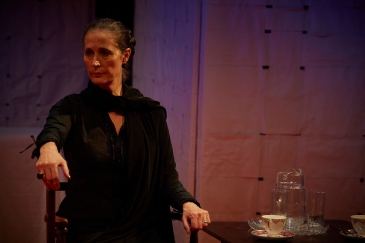 Entwined with Bernarda’s lip service to propriety is her steadfast belief that the family’s wealth makes them superior to the other residents of the village. The unfortunate ramifications of this is ‘nobody’ from the village is ‘good enough’ for her daughters, so they are destined to remain spinsters until her death. As the matriarch, Conlon strikes an imposing presence on stage, leaving the audience in no doubt as to why her daughters obey her every word… most of the time. Even Maria Josefa (Gilly Daniels) – Bernarda’s mother – has to abide by her will, kept under lock and key so that she doesn’t ‘embarrass the family’ in public. However, like the Fool in King Lear, she is the only person that can say what she likes without impunity – often ‘hitting the truth squarely on the head’. One also wonders whether she was like Bernarda in her youth and a foretaste of things to come for her daughter… 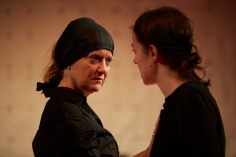 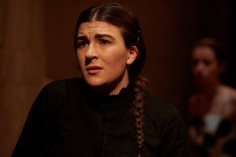 As for Bernarda’s daughters, they are well-cast and exhibit a range of responses to to their situation. As the eldest daughter, Angustias (Joanna Kate Rodgers) is pushing 40 with a sickly constitution, so under normal circumstances not seen as the most likely to get married. However, as she’s inherited the lion’s share of her father’s wealth, she’s attracted the interest of Pepe el Romano – a young, insolvent young man from the village who the Alba sisters are all attracted to. As a de facto convent, replete with strict religious discipline and a lifetime of celibacy, the Alba household is made all the more untenable by el Romano’s nightly visits to the house. Mirroring the heat of the weather, the desires of the sisters reach a feverish intensity, not unlike the characters in Rumer Godden’s Black Narcissus. Maite Jáuregui who plays Adela, shows considerable fire as the youngest sister who won’t spend the best part of her 20s under what is effectively house arrest. Amelia (Adela Leiro) and Martirio’s (Beth Smith) quiet observations make a notable contrast, while the barbed coments of Magdalena (Candela Gómez) reveal her suspicions about everything.

In this particular production, the message hammers home about the oppressive nature of what is expected of women, expectations that over the millennia have been self-imposed for fear of being branded a ‘scarlet woman’, a harlot. At the same, the play subliminally hints at the insuperable attraction between men and women, that no conditioning can overcome. The non-verbal lure of the masculine ‘other’ calls to the women – much like the fabled Sirens in reverse or Dionysus calling out to the Bacchae – to live instinctively in the moment without hang-ups or regrets.

NB: This production at Cervantes Theatre is performed in either Spanish or English, depending on when the audience attends. To check which language is being performed on a given afternoon or evening, see http://www.cervantestheatre.com/home/