Enjoying a successful run at the Edinburgh Festival this year, Natasha Marshall’s Half Breed returns to Soho Theatre this month. A semi-autobiographical one-woman show, Half Breed follows Jazmin, a teenager of ‘dual heritage’ from Wiltshire. By her own admission, Jazmin is the only ‘person of colour’ for miles around and what with her village being small enough so that ‘everyone knows everyone’, she is in her own way a local ‘celebrity’. 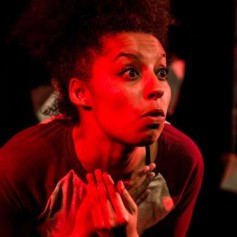 Central to the play is Jazmin’s relationship to her best friend Brogan. As different as can be in temperament and appearence, the one thing they have in common is they are the focus of a disproportionate amount of gossip. For Brogan, it’s her love life that gets tongues wagging, as she hasn’t had the best luck with lasting relationships, but it doesn’t stop her seeking love.

From the off, Jazmin admits she’s an indecisive person by nature, but there is, perhaps, a reason for this. With no parents in her life, she doesn’t know how she feels about her identity, her ‘roots’, except that she’s neither ‘white’ but can’t truly be labelled ‘black’ either. Living in area where there aren’t ‘role models’, she has no one to ask about practical matters such as her hair and skin, or know how other mixed-race people feel, cope and think.

Fortunately, Jazmin’s grandmother has the foresight to submit her name for an acting school. Not only will it allow her to pursue her passion for acting, Jazmin will get to meet new people from all different backgrounds. And while London isn’t perfect, there’s a greater chance of acceptance for Jazmin because of its cosmopolitan nature. 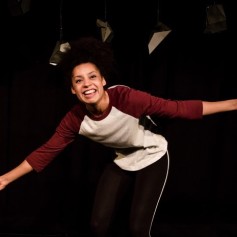 There is one pivotal scene in the play where Jazmin is able to set the record straight about a lot of things, but doesn’t initially, for fear of upsetting her best friend. For some reason, this reminded me of Edith Wharton’s The House of Mirth. The protagonist Lily Bart has been disparaged in her own way, but despite being able to clear her name, she doesn’t do so, leading to tragic consequences. I found myself thinking “Half Breed had better not follow Mirth’s events. Jazmin, stick up for yourself and don’t jeopardize your own happiness.” But then I’m later reminded that apart from the grandmother who raised her, Brogan is Jazmin’s touchstone – the only other person who makes her feel like she remotely belongs anywhere. Losing her would set her adrift. In this sense, Half Breed is a paean to female friendship.

While their relationship is a bright spot in this narrative, elsewhere, the darker aspects of living in ‘homogenous’ community surface – including how effortlessly disparaging comments about ‘those who are different’ occurs within the status quo.

By the time the play reaches its denouement, Jazmin ’embraces’ being a mirror to her community’s prejudices and shows them using their own vocabulary how shocking their behaviour is. The rhythm, meter and choice of the words Marshall uses hits the audience like bullets. It makes for very uncomfortable viewing, but then it should. It is a stark reminder that the denigration of an individual, of a community, based on their ‘otherness’ is unacceptable and that we’re all responsible for speaking out on such matters.

Marshall puts in an impassioned performace as Jazmin, shifting between the various characters at a moment’s notice, as well as juggling humour with pathos.

Half Breed doesn’t pretend to have the final say on life as a mixed-race person in the 21st century. After all, it is the experience of just one ‘woman of colour’ growing up in an non-metropolitan area. What Half Breed does show, however, is that ‘belonging’ is colour-blind, and that away from public scrutiny with the absence of education, ignorance can thrive unchecked.