Much has been written about Germany in the early 20th century: the rise of Hitler and the National Socialist German Workers’ Party, the military campaigns, the Kristallnacht… But one subject that is seldom talked about is how the ‘Weimar Republic’ – the economic period of depression between 1919-1933 – affected the working class, especially women. Some stories seem too remarkable to be true, but they persist such as the legend of Pope Joan. In a similar fashion, one tale from the Weimar Republic resurfaces time and time again – that of a German woman who takes on the identity of her dead husband without anyone suspecting and works at his former job as a crane operator… 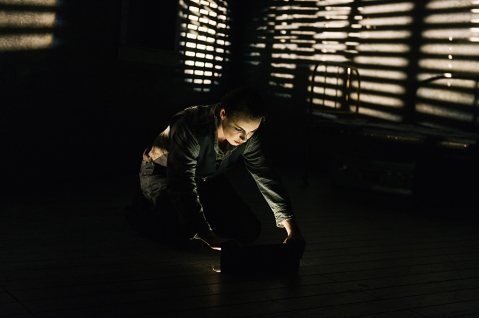 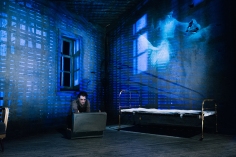 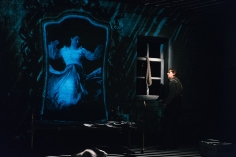 Written by Manfred Karge and translated by Alexandra Wood, Man To Man addresses the beginnings of ‘women working in a man’s world’. Maggie Bain plays the eponymous ‘Man’ that’s based on Ella Gericke, a real woman who for 12 years worked under her deceased husband’s identity. As a solo show, Bain talks to the audience about Ella’s feelings and rationale for her choices – the fear of destitution, keeping the memory of Max her husband alive, to be safe from other men and a host of other reasons. Pre-dating the migration of British women in the workplace during the Second World War, Ella’s actions are a foretaste of the malleability of gender roles in the 20th century and beyond.

Under the direction of Bruce Guthrie and Scott Graham, Man To Man is infused with a German Expressionist aesthetic and the audience is instantly drawn into this dreamlike world. Rick Fisher’s lighting and Richard Kent’s set design evokes a noir-esque, off-kilter world with Kafkaesque overtones. The scenes where ‘reality shifts’ and Bain is perched up on walls like a fly channels Kafka’s Metamorphosis – a symbolic reference to Ella’s transition of one person to another.

Aesthetically speaking, the icing on the cake is Andrzej Goulding’s ‘shadow’ projection design. Asides from being exquisite in its own right, it conveys visually Ella’s innermost thoughts and events of the outside world.

Visually, Man To Man is a treat for the eyes, but beneath its palpable atmosphere and beauty, it asks its audience what line they wouldn’t cross to stay alive.