The announcement of the Covid lockdown prior to the premiere of Death Of England: Delroy could have been the death knell of the new play. However, on the 27th November, the National Theatre posted the play online for 24 hours. Undoubtedly, one of the major landmarks of 2020 has been the ubiquity of the Black Lives Matter movement. But even before its presence this year, the issues it addressed had been present for untold decades – only the Establishment wasn’t listening. As this production is told through an undiluted ‘Black’ prism – writer Roy Wiliams and director/writer Clint Dyer – Death of England doesn’t run the risk of its artistic vision being ‘compromised’.

For such an important play, Death Of England could be didactic – very heavy-handed in its approach to the lives of Black British people. Instead, its lead character Delroy (Michael Balogun) doesn’t conform to the stereotypes of a working class Black British man, either in terms of behaviour or ‘political proclivities’. Instead, we have a Black man who is a ‘pariah’ for very different reasons – gladly working as bailiff… a bailiff who voted for Brexit and the chaos that will ensue.

Not all of this information comes at once though – the first half of the play concentrates on Delroy’s relationship with fraught girlfriend Carly who is expecting their first child, plus her brother Michael who was once Delroy’s best friend. Labelled a pariah by the public at large is one thing, but to be estranged from those supposedly closest to him is hard for Delroy to bear… Of course the reasons for the ‘mutual falling out’ are more nuanced than can be ascertained by casual inspection – as complicated as Delroy himself. For all of his solipsism he does, however, take a dim view of Black British people in certain vocations, but it’s a case of personal freedom trumps social obligation.

In addition to the internal strain within the Delroy-Carly relationship, Delroy’s mother has made it known she disapproves of them as a couple, thinking her son should be with ‘his own kind’. Without a ‘social support system’ in his life, small wonder he has developed a very different perspective on one’s place in society… 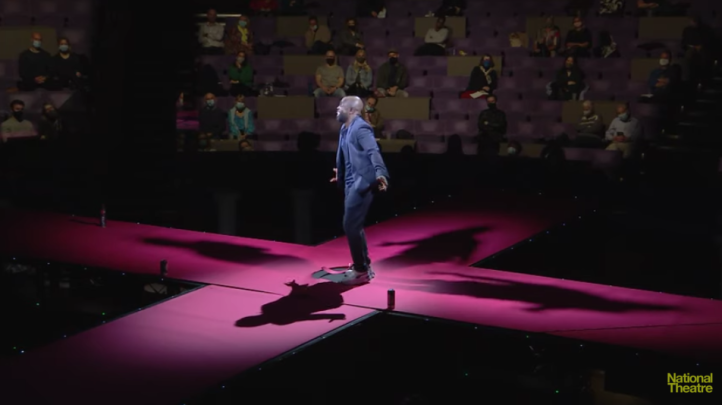 In the second half of the play, we see how Delroy’s perspective evolves out of necessity, when life jolts him out of his ‘comfort zone’. Seeing all the pieces fall into place, the maturity of the play is evident in the way it deconstructs motives and actions. Far from things being ‘black’ and ‘white’, we come to understand the rationale of even the most unconscionable of actions and the play goes some way perhaps to explaning why Britain is the way it is today.

Should the National Theatre add Death Of England: Delroy on its new pay-for-plays streaming service, do check it out.