Comedy duo Kat Ronson and Katerina Robinson have been keeping busy recently with their new web series The Lads. In some ways a ‘Kevin & Perry’ for the 21st century, ‘Dave’ (Ronson) and ‘Charlie’ (Robinson) are two teenage boys from East London who have agreed to take part in a doc/mockumentary. Each episode lasts approximately five minutes, highlighting facets of life that everyone will recognise.

In the first episode, we find out their ‘true’ names (versus what gives them ‘street cred’) and despite their competitiveness, who is generally the most likely to ‘fly off the handle’. Challenging each other to eat the spiciest chicken wings, they raise the stakes by eating them with copious amounts of ‘hot sauce’. Common sense dictates that cold beverages would be ready to hand when embarking on this activity. Yeah… Worth watching for Ronson’s expressions as the heat takes effect. “Thank you Cravendale.” Broaching the subject of online etiquette, the second episode cleverly tackles the interpretation of ‘mixed signals’ and the danger of assuming attractive women on social media are ‘easy’ or ‘available’. Through their flawed logic, we see how they could come to the conclusion that ‘taking a selfie of oneself’ and passing it to women is a ‘natural’ thing to do. As in all the other episodes, whenever Dave and Charlie do something impulsive, the consequences are always worse for Dave. “…Because of the toxic masculinity, we don’t need it.” “You don’t want to be like Britney Spears in ‘Toxic’.” Beginning straight after the second episode, The Lads Take It To The Grave sees Charlie and Dave engaging in one-upmanship again, as they brag about their sexual prowess and the size of their respective ‘todgers’. Of course, nobody actually wants to do a ‘show and tell’ for any number of reasons – the most pertinent being what if they ‘fall short’? It dawns on them that a less embarassing compromise may be found in the assumption of ‘Big feet, big …’ So who has the largest ‘plates of meat’..? “I don’t know where you’ve been.” “I’ve been everywhere mate!” 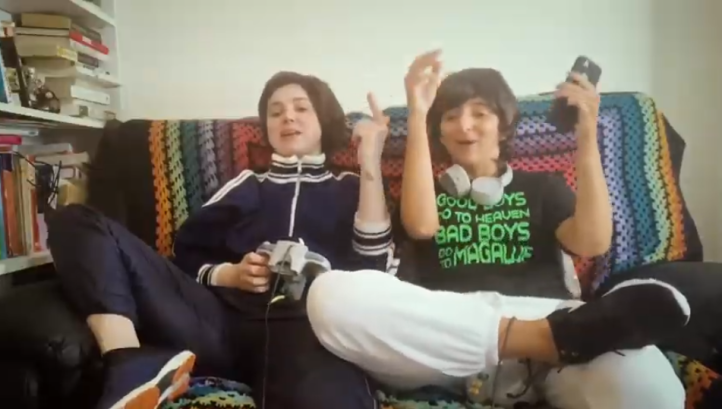 Acknowledging the camera’s presence for the first time since the beginning, ‘the lads’ in the fourth episode shake up the routine by preparing to go to a festival. However, we also see them debating the acceptability of wearing ‘bumbags’ in public. Even during the height of their ‘popularity’ in the 1990s, bumbags were never considered cool. Why wear them in 2020? “I told you about calling me out in my own ****ing house!” As an improvisational sitcom, The Lads has a lot of promise, and the chemistry between the actors is a major plus. Certainly, Ronson and Robinson never fail to tap into the comic potential of situations, coaxing out the innate schadenfreude with their ‘on point’ timing, facial expressions and body language.

The Lads can be viewed online at: https://www.comedy.co.uk/online/the-lads/