Following a successful run in the West End, the stage adaptation of The Exorcist continues on a UK tour. Adapting one of the scariest AND critically-acclaimed horror movies as a piece of theatre was always going to be a tall order and and an ambitious one at that. So how does this production fare?

In the case of this production, while most of the memorable scenes appear in some form or other, the play doesn’t slavishly follow the order of the film and spends more time with the back history of certain characters. As you would expect, at the centre of this tale is the relationship of movie star Chris MacNeill (Sophie Ward) and her daughter Regan (Susannah Edgley). While their catchphrase “Love you more than life itself” shows an unusual level of spoken affection between them, obviously as the tale unfolds this is severely put to the test. Interestingly, a subplot involving a family secret is also introduced – its surfacing adding additional level of psychological tension and strain to the proceedings.

For my money, the most interesting ‘deviation’ in the show from the film is the importance of the director Burke Dennings. Played by Tristram Wymark, we can see why he’s an important part of the MacNeil’s lives. Possessing a ‘naughty’, playful charm, he also in this production has a connection with Father Damian Karras (Ben Caplan) which didn’t exist previously in the film. While Dennings intially uses Karras as a ‘sounding board’ (with their mutual platitudes amusingly annoying each other) they both feel deep down they deserve whatever’s coming their way… 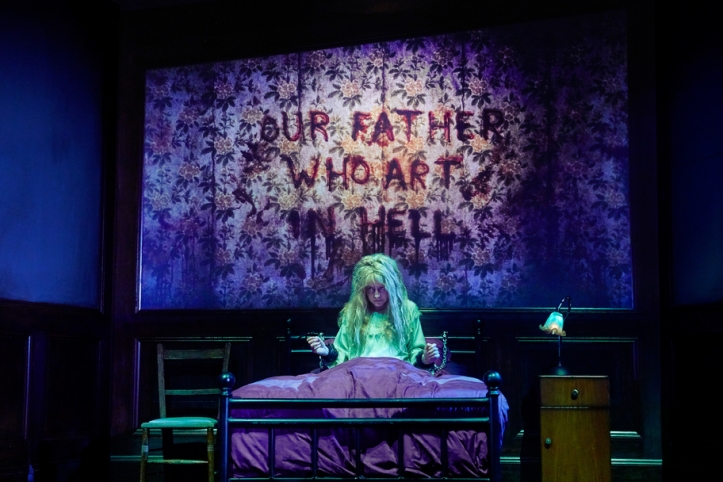 The voice of the demon, played by Ian McKellan, is well-cast and and not only do we have him be Regan’s ‘mouthpiece’ during her possesssion, we hear him also as ‘Captain Howdy’ when he duplicity ‘speaks’ to her.

Having played Jesus in the inaugural run of Jesus Christ Superstar, Paul Nicholas plays the eponymous role in this production (and ironically mirroring actor Max Von Sydow who played Jesus early in his career before playing Father Merrin in the film).

Like all good supernatural tales, the scariest thing thing is often what one hears rather than what’s seen and in this show, Adam Cork’s sound design is no exception. Ben Hart’s projections behind Edgley serve to show what’s happening with Regan personally and the tightening grip of malevolence in the household.

In contrast to other supernatural shows based on prexisting films/books such as Let The Right One In and The Woman in Black, The Exorcist compares favourably. By treating this narrative as a piece of theatre and playing to the strengths of the stage, this production honours the ‘theatrics’ of the original film, while exploring the seldom seen side of the principal characters.

Written by John Pielmeier, based on the book by William Peter Blatty
Directed by Sean Matthias