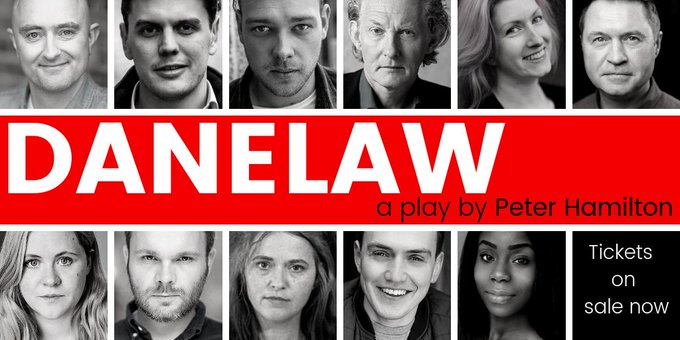 A member of the Establishment visits a known felon in prison with a history of racially-motivated violence. The reason for the visit? To recruit said felon as a footsoldier – nay, a leader – as ‘muscle’ to change the status quo by force and eventually bring about a ‘breakaway’ ‘white-only’ state within the British Isles… Written by Peter Hamilton and directed by Ken McClymont, Danelaw’s premise is ‘white hot’ in terms of its relevance to current events in the UK. What’s perhaps more amazing is that Hamilton wrote this play 15+ years ago, though time will tell whether it is a warning or a prophecy. Perhaps like George Orwell’s Nineteen Eighty-Four it will be both…

The play has a large cast (11 in total) and each person in their own way illuminates the ‘shades of grey’ in terms of people’s thinking, motives and actions.

As an aristocratic civil servant, Warboys (as played by Craig Crosbie) has a relaxed, charming countenance, not unlike the sort of characters Bill Nighy often plays. Spending several years behind bars, the unrepentant Cliff (Dan Maclane) is stoical and takes a philosophical view of his predicament. His cellmate Paul (Bradley Crees) is easygoing by nature and often ‘goes with the flow’.

In contrast to how well he gets on with his cellmate, things between Cliff and younger brother Jason (Will Henry) are a little strained – in part to do with how with their polarised points of view differ and how afraid Jason is of his brother’s temper. But Jason isn’t the only one that’s relieved Cliff’s in jail. Cliff’s estranged girlfriend Rowena (Josie Ayers) enjoys her ‘solitude’ looking after his ‘business’ while he’s detained ‘at Her Majesty’s pleasure’.

Unlike Rowena, Helen (Evelyn Craven) finds herself happy to be made Cliff’s ‘Viking queen’ after initially finding herself the apple of Jason’s eye. Initially reticent to be part of Cliff’s crusade, cellmate and poet Graham (Richard Fish) finds himself caught up in the ‘romance’ of the situation and accepts the official position of ‘Bard’.

Turning national stereotypes on their head, Far-Right Dutch activists (Emma Stannard, Marcus Kinsella, Marcel Hagen) heed Cliff’s rally cry to help ‘liberate’ East Anglia from the rest of England. Pragmatic, yet at the same time not averse to violence, each of the trio conveys a slightly different reason for wanting to take part in this coup d’état. Outside of this circle of discontent, psychiatrist Anastasia (Tomi Jatto) is privy to the ‘wheels within wheels’, yet powerless to shape the coming events.

One might be forgiven for thinking that the play will be unrelentingly bleak, but in truth the play is a satire and doesn’t avoid the more absurdist elements of storytelling. However, that doesn’t mean that the play shys away from the violence or inflammatory language that this subject engenders.

Had Danelaw been written this very year, perhaps the developments in the latter half of the play would have taken a different turn and taken closer inspiration from the news headlines. Despite this, even with humour being present at judicious instances, it doesn’t detract from the play’s conceit about the possibility of such a thing happening. Only now it isn’t an ‘absurd’ notion – at least in terms of the powers-that-be entertaining the idea of such an enterprise…