In literature, a pet’s point of view is a narrative device that’s been used by the likes of John Berger, Chekhov and Kafka. Often this device is used to comment on the positive qualities of dogs such as loyalty and living in the moment versus the human capacity to inflict harm on man or beast indiscriminately. On stage, ‘pets’ aren’t so common, but that’s not to say it doesn’t happen… Written and directed by mother-daughter duo Jacqueline and Tamar Saphra, The Noises is an intimate tale that illustrates the Venn diagram of relationships involving the family dog.

Amy McAllister plays Luna and captures perfectly the inner life of a pet who can’t help but demonstrate how she’s feeling through her body language. For the most part standing upright, McAllister’s movement as Luna is conveyed by the weight she places on her hips and slight curvature of her spine.

While Luna’s locked within her room one evening, we hear everything she does within the household. Luna has a different relationship with each member of the family and regardless of her feelings to them, she picks up on their respective heightened emotions. 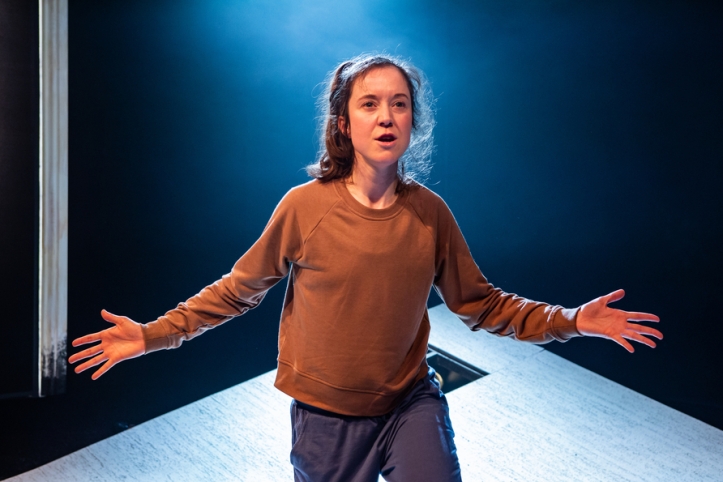 Closest to Luna’s heart is Ellie, the daughter, while at the other end of the spectrum is Ellie’s mother. Details like these are disseminated from Luna throughout the show and while she’s aware of ‘raised voices’ and other ‘activities’, her ‘understanding’ of what they actually mean is limited. In some ways Luna’s ‘comprehension’ of events is comparable to the character of Christopher Boone in The Curious Incident of the Dog in the Night-Time.

Tom Parkinson’s sound design in The Noises plays a major part of the narrative and while we gauge what’s going on initially, our comprehension later mirrors Luna’s, as the intrusive, cacophonous outside world encroaches on the sancitity of the home. The play certainly made me think about what pets make of ‘family dramas’ and how ‘we humans’ fail to recognise what they’re feeling through their behaviour.­­