While homosexuality is present all over the world, its acceptance in secular western nations has on the surface at least, assauged the stigma it once had. In the Middle East, where the Abrahamic Faiths have an unwavering stance on their (lack of) acceptance of same-sex relationships, it is more problematic and people aren’t at liberty to identify themselves as LGBTQIA, let alone practise a ‘gay lifetsyle’. Written by Tom Coash and directed by Pamela Schermann, Cry Havoc looks at a relationship between a British man and someone from Egypt.

There are elements of the plot that echo Nick Myles’ play London-Damascus, where a Briton corresponds with a gay man from Syria. However, while that play dealt with building bridges across in cyberspace, in lieu of a local ‘scene’ to immerse oneself in, Cry Havoc deals with not only the ‘practicalities’ of conducting a same-sex relationship in Egypt, but also the ambivalent feelings regarding ‘coming out’ versus privacy. 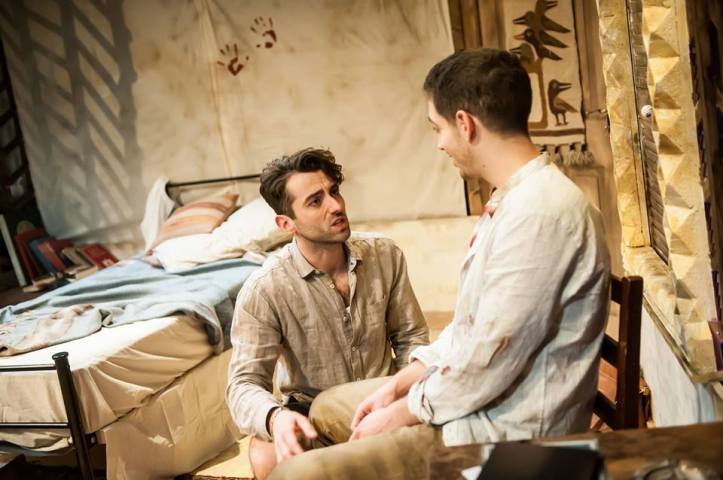 In Cairo, Mohammed (James El-Sharawy) has been detained by the authorities, leaving his frantic British partner Nicholas (Marc Antolin) to search and petition on his behalf… Except Nicholas can’t state the nature of his relationship with Mohammed without giving the authorities ammunition to lock up Mohammed indefinitely…

Much like Yaël Farber’s reinterpretation of Miss Julie set in South Africa, Coash’s play taps into the subtext of Europe’s colonial past with the rest of the world and the unsaid, subliminal understanding about who has the power in a ‘mixed’ relationship – as well as how its viewed by society at large.

Nicholas’ disbelief and naivety about what happens to suspected homosexuals by the authorities is shown repeatedly. And while Nicholas has connections and ‘privilege’, he is in some ways less ‘worldly’ than Mohammed.

Interestingly, Mohammed doesn’t feel that being gay is mutually exclusive to being a devout Muslim and Egyptian. Also, it is Mohammed who exhibits the stereotypical British ‘stiff upper lip’ when things get bad, as well as the self-deprecating dry sense of humour to ‘cope’. However, not unlike Alex’s experiences in Anthony Burgess’ A Clockwork Orange, Mohammed’s brush with the authorities leads to his ‘appetites’ dissipating – replaced by an epiphany about his place in the world.

As an ‘outsider’ looking in, Karren Winchester’s Mrs Nevers (from the British Embassy) tests Nicholas and challenges his aversion to introspection. As a personality on stage, Winchester is intially engimatic and exudes a Pinteresque sense of foreboding. She also asks the same question as the Egyptian authorities – something the audience picks up on, regarding the State’s ‘right’ to probe. “What is your relationship with this man?” An accustory remark, or a line of inquiry of a benign nature?

The play itself initially explores the obstacles a same-sex couple has in a regime that has little-to-no accountability. However, the play evolves into an examination of culture’s place in one’s identity and why it is so hard to extricate.