One of the most prolifc singer-songwriters from the 1960s-80s, Neil Diamond has left an indelible impression on popular music. Now that he is unable to tour, Diamond’s absence from the world’s stage is sorely felt. Taking up the mantle, A Beautiful Noise is a tribute show by Fisher Stevens to the music of Diamond. Performing in lead vocals for the majority of songs, Stevens makes every effort to look and sound like the man himself. But rather than showcase Diamond’s songs from beginning to end without context, time is made in the show to reference his musical peers, plus his years in Brooklyn and the Brill Building which shaped his formative years. 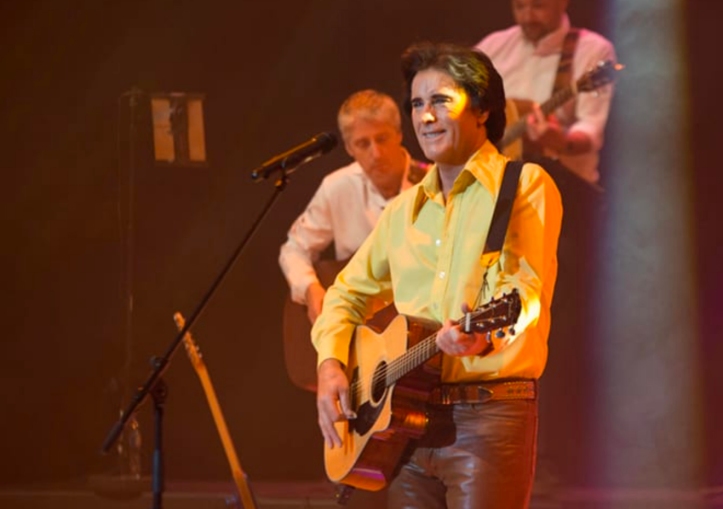 Accompanying Stevens on singing duties are Rebecca Cole and Samantha Palin. Primarily on backing vocals, the ladies also get to shine in solo spots. In Cole’s case, it’s singing The Boat That I Row and in Palin’s, You Don’t Bring Me Flowers (a duet with Stevens mirroring the duet with Diamond and Barbra Streisand). It is, however, when Palin sings Streisand’s Woman In Love that her voice truly soars – guaranteed to give you goosebumps.

If there’s one area that would make this entertaining show more ‘satisfying’, it is the order of some of the songs. The second half of the set features some of Diamond’s not-so-famous tunes, which instead of building up to a climax, lessens the momentum. There’s more than enough songs in Diamond’s back catalogue to use instead, which would also be a more welcome inclusion than the tangential material in the show.

Having said all that, where A Beautiful Noise works, it works really well. Stevens clearly loves performing for- and interacting with the audience, as do the other singers and musicians on stage. When called for, they share a sensitivity to the nuances of the quiet songs such as Play Me, as well as the rising to the energy and enthusiasm required for Holly Holy. On songs such as Forever In Blue Jeans, the atmosphere is electric.

In lieu of the great man himself, A Beautiful Noise is a worthy tribute to Diamond and his legacy to music.

A Beautiful Noise ran at Lyric Theatre on 11th February. The show returns to the same venue on Monday 10th June and Monday 8th July.