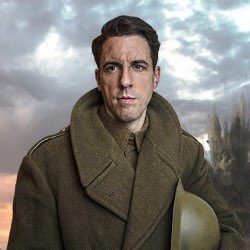 A labour of love, David William Bryan’s latest show In Loyal Company is a tribute to the life of his great-uncle Arthur ‘Joe’ Robinson and the other ordinary men and women who served during the Second World War. While tales of the Blitz are invariably about strikes over London, many other cities and towns in Britain faced the same fate. As Robinson, Bryan recalls one such raid over the streets of Birkenhead, Merseyside – an event that would lead to the death of one of his closest friends and Robinson himself enlisting.

But before Bryan hurtles headlong into Robinson’s escapades overseas, he eases into the tale by introducing his civilian life. One of six siblings, ‘Joe’ lives at home with the rest of the family. Even though he’s not in the Armed Forces, he does ‘his bit’ for the war effort and like most people enjoys a night out ‘dancing’ – or rather an excuse to bump into Mary, the ‘apple of his eye’. When bombs encroach upon even this safe haven, it’s not just the houses on the street that can’t be put back together again… 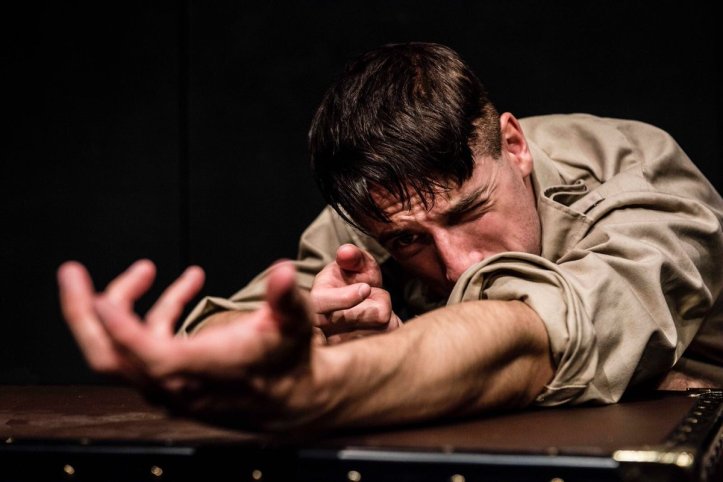 While Robinson gets to travel to various countries, the most important part of every place he visits are the people – especially the soldiers her serves with who become his surrogate family. However, following Japan’s increased presence in the Pacific from 1940-1942 and the fall of Singapore, Robinson finds himself a prisoner of war. Anyone who has seen David Lean’s The Bridge on The River Kwai will have an inkling of what the Commonwealth soldiers faced as slave labour and given ‘food’ unfit for consumption. Robinson’s tale, however, is no fiction, and all the more distressing because of it. Of course, one could draw parallels with Kwai‘s Lieutenant Colonel Nicholson and Lieutenant-General Arthur Percival who gave the order for British surrender of Singapore, but that’s an argument for another day… 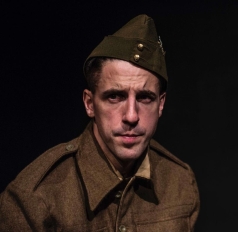 Far from being a tale about pomp and circumstance, and doing one’s patriotic duty, In Loyal Company is rooted in the humanity of its characters – both at home and abroad – and the lengths one would go through to protect all that we cherish. But as in every “hero’s quest”, the most telling moment is when he returns home and he ponders – has he changed or has the world around him?

Bryan gives nothing less than 100% in this engaging tale, that takes the familiar and repeatedly finds ways to look at events from a different perspective.

In Loyal Company runs at Venue 33, Pleasance Courtyard – Beside from Aug 12-27. Times vary. Click ‘Dates, times and prices’ of EdFinge site to view the calendar.