Valerie is the ‘perfect’ housewife. She loves to cook meals for her husband. She loves to bake. She even loves to do housework. The icing on the cake though is that she has her own television show and able to impart her ‘gems of wisdom’ to the general public… Written and performed by Lilly Driscoll, with direction by Rafaella Marcus, Only You looks at the codes and values of the 1950s, and how they clash with today’s mores.

As Valerie, Driscoll talks to the audience as if it were part of a TV studio audience. However, in between the discussions about cooking etc, the play’s hyper-reality switches seamlessly to extremes of opinions: the ‘sage’ advice that would have been spoken by the likes of Fanny Cradock and at the other end of the spectrum, Valerie’s Freudian slips which exponentially increase in regularity and detail…

Asides from opening up on certain issues, we also hear the points of view of Valerie’s husband and her mother. Raising a family has always been considered a major tenet of marriage, but Valerie’s mother goes against the grain of ‘conventional wisdom’ to express her thoughts on the matter.

While there is a ‘child-shaped hole’ in Valerie’s marriage, the reasons behind this are complicated and not so clearcut. Even then, having a child wouldn’t automatically smooth things over between husband and wife. 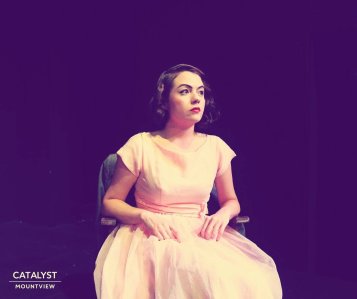 In an era when women were effectively housebound while men could expect to travel as part of their job, the inequitable division of ‘freedom’ between the sexes strains over time, leaving Valerie to fantasise having conversations with salesmen or anyone from the outside world.

Surprisingly, Valerie isn’t the only one who is lonely, as her husband is cut from the same cloth as Frank Whitaker in Far From Heaven. While Valerie and her husband would have problems even if they were as ‘conventional’ as everyone thinks they are, knowing the true nature of Valerie’s other half explains a great many things.

Visually, there is a progression between Valerie’s initial immaculate make-up and her honesty – the more candid she is, the more she ‘over-applies’ her lipstick etc, progressing to a clown-like countenance and then to ‘warpaint’. But as the play’s set in 1955, conventionality and ‘fitting in’ is key, so outside of this moment, Valerie and her husband won’t be able to express themselves unapologetically…

Only You ran at Theatre503 on 9th and 14th July as part of the Catalyst Festival.