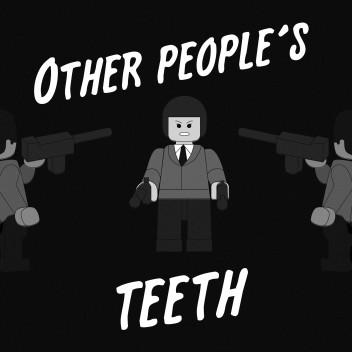 Narratives involving those who earn a living by killing people are often deadly serious or black comedies. When the latter has been used, there is often a time of reflection and questioning the feasibility of connecting to another human being if one’s ‘vocation’ is the termination of life. The last play on the Fringe to deal with these issues in a big way was Sprocket Theatre’s The Rules: Sex, Lies and Serial Killers. Three years later, Want the Moon Theatre tackles this subject with a play by Dan Sareen, although it has a slightly different tact…

Directed by Jess Williams and Dan Sareen, Other People’s Teeth addresses the notion of being paid to hurt and kill people, yet still holding down a meaningful relationship. As a black, ‘romantic’ comedy, Other People’s Teeth wears its influences on its sleeve, drawing in threads from Grosse Point Blank, In Bruges, True Romance, The Long Kiss Goodnight and numerous other sources.

Breaking the ice over different tastes in films, Joss (Becky Downing) and Simon (Dan Sareen) are in many ways an unlikely couple. Simon thinks about things a lot – arguably a bit too much – and not one to be compulsive. He does, however, have a gentle disposition and tries to be considerate to others. Joss… well Joss (in her own element) is self-assured and while she enjoys her ‘vocation’, she intuitively knows that there is more to life – especially hers. Because she confronts people’s ‘final moments’ every day, it prompts questions about her own true purpose and does anyone really ‘seize the day’. Besides, ethics aside, if being a contract killer isn’t enjoyable, surely that’s reason enough to consider other options?

While Joss embarks on her burgeoning relationship with Simon, she has a ‘partner’ of sorts – Sol (Adam Walker-Kavanagh). While they ‘work’ together’ ‘on the job’, Sol has a predilection for applying ‘psychological duress’ to people he kidnaps. He has a ‘script’ that he follows – as much a way to unsettle the people he’s kidnapped as a genuine interest in asking existential questions. Ellen Harris who plays both ‘victims’ is a catalyst for challenging Joss and Sol’s points of view. As Victim #1, she assumes that Joss as a woman isn’t as ‘sadistic’ as her partner and at some level can be reasoned with. However, as Victim #2, she ‘ruins’ the ‘roleplay’ for Sol who expects the usual pleading for one’s life and instead meets stoic resistance.

Downing and Walker-Kavanagh’s chemistry grounds the play, conveying the rapport they have as ‘colleagues’, as well as the reasons for their philosophical differences. As for the structure of Sareen’s play, utilising a non-linear timeline (à la Pulp Fiction) accentuates what it is about the respective characters that makes them tick and what the play is really about.

It will also be playing at the Edinburgh Fringe Festival at: https://tickets.edfringe.com/whats-on/other-people-s-teeth