Beginning as a BBC radio play in 2009, Anthony Biggs’s production of Gregory Evans’ Shirleymander is a timely revival, and so on the nose in terms of topicality and relevance. Based on Anthony Hosken’s book Nothing Like A Dame, the events that transpire in the play were widely reported in inquiries at the time and subsequent years. If one were to see the oeuvre of playwright James Graham, his plays about the latter of the 20th century show how political decisions decades ago have shaped today. Similarly, while the events of Shirleymander led to one immediate political scandal, Shirley Porter’s policies in the 1980s have had far-reaching consequences.

Bookended by the later years in Beverly Hills, Porter (Jessica Martin) awaits the latest report regarding her ‘practices’ when she was in charge of Westminster Council. The ‘present’ leader (Jack Klaff) is hard at work on damage control – spinning to the PM that the present inquiry is just a preliminary investgation and throwing aspertions on the ‘neutrality’ of the inquiry in general. Most of all, “Never, ever admit liability. All policies were carried about by the previous administration.”

On first impressions, Porter doesn’t show any obvious leadership potential, but with the changing of the guard, Porter’s ‘true colours’ come to fore. Determined to cut expenditure on all ‘non-essential’ services, she authorises the sale of three London cemeteries for 15 pence. This would eventually come to ‘bite her’ in the future, leading to the closest occasion that Labour had to running the Tory ‘flagship’ council. In response, she institutes an unofficial policy to ‘facilitate’ the removal of ‘undesirables’ and through the sale of council houses in the ‘magic eight’ marginal wards, encourage affluent citizens to move in who are likely to vote Conservative. Of course, this gerrymandering is illegal, but as in all things, spin, subterfuge, deniability and the absence of challenge play their part.

So how does this play convey such tumultuous times?

Tonally, the play reminded me of Lucy Prebble’s ENRON, in that it eschews ‘realism’ for a heightened reality, accentuating its satirical elements. The thrust stage – which is dressed like a Rubik’s Cube on different levels – indirectly references not only the time that the play is set, it alludes to the countless ‘manoeuvring’ on all sides that Porter made over the years to coax the ‘right’ people into parts of London. 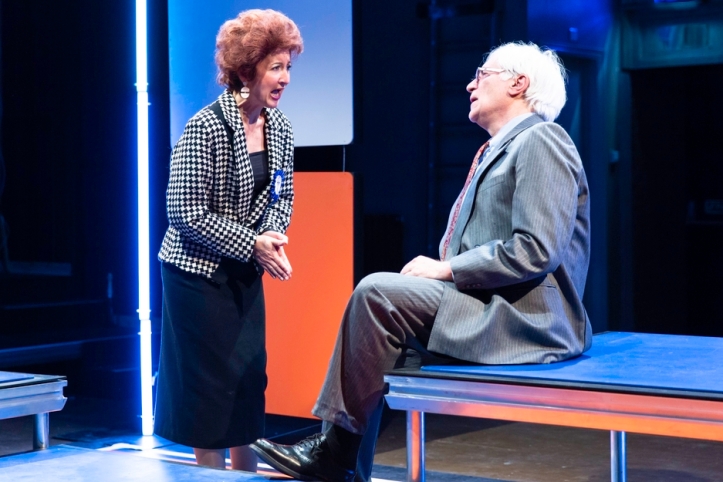 Martin’s Porter is very much cut from the same cloth as Margaret Thatcher, though it’s interesting to see that Porter sees herself not as a ‘Mini-Me’ of the PM, but the ‘heir apparent’ to her father’s Tesco empire, destined to be ‘Minister For London’ and the House of Lords.

The rest of the cast play multiple characters, but in certain roles, they all make their mark. As the Tory ‘wet’, Amanda Waggott shows there was resistance by some within the rinks to Porter’s policies, but whose efforts were thwarted. George Potts’ ‘Chief Executive’ demonstrates that Porter’s right hand man knew exactly what she had in mind, while Omar Baroud’s ‘non-political’ ‘Council Officer’ is troubled from Day One about the legal ramifications of even knowing about ‘Building Stable Communities’.

The initial naivety of James Horne’s ‘District Auditor’ is laughable in the way that he presupposes that all MPs are ‘honourable’, while Jack Klaff’s ‘Deputy’ is practically evangelical in his condemnation of the ‘Building Stable Communities’ Inquiry. In contrast to the way local government is depicted in Jack Thorne’ Hope, the truth is stranger than fiction…

As the play closes, during its final moments, projections of Grenfell Tower are shown to the strains of the Prodigy’s Firestarter. Why? Because as a direct result of Porter’s cost-cutting policies, people were relocated to sub-standard housing, buildings that were knowingly unsafe for the general public – including Grenfell Tower.

Between Latimer Road tube station and the Playground Theatre, there’s much evidence that for west London residents, time has not dimmed their memories or abated their anger. If these people in the community were to watch Shirleymander, their anger would undoubtedly be incendiary, greater than the blaze that engulfed Grenfell Tower.

Shirleymander runs at the Playground Theatre until 16th June.