Unencumbered by ambition or expertise, Secret Life Of Humans – which is written and co-directed by David Byrne – straddles the political and the personal. It’s inspired by the true story of Jacob ‘Bruno’ Bronowski, mathematician and broadcaster – and enigma.

From the off, Secret Life is unlike any conventional show. Metatheatricality plays a big part, but this isn’t a choice borne out of a desire to intellectualise the subject matter. The play, broadly speaking, is split between two narratives – Bruno’s (Richard Delaney) and the fictional narrative regarding his grandson, Jamie (Andrew Strafford-Baker). A date with Ava (Stella Taylor) – an academic who is familiar with Bruno’s work – sparks a quest to find what out what he kept locked away in his study.

In some ways, the show’s structure mirrors Tom Stoppard’s Arcadia, in that an investigation on a premises in the present has a bearing on events that transpired there in the past. There’s much talk about the ‘progress’ of Man, and what he has accomplished over millennia. At a personal level, Bronowski’s life brings a focus to what’s transpired in the last 100 years or so, and his contribution to the history of Europe in the 20th century. 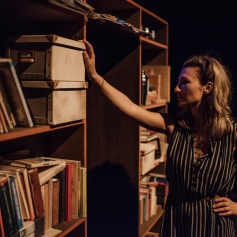 In terms of the way Secret Life‘s staged, it’s very fluid – a marriage of cutting-edge graphics and movable scenery. AV projection within theatres has improved in leaps and bounds over the years, but its use in conjunction with gravity-defying wire work in Secret Life elevates the storytelling techniques.

Via Ava, Jamie and Rita (Olivia Hirst) – Bruno’s wife – we have a sense of how the outside world views Bronowski versus his family, and depending on one’s point of view, who sees with greater clarity and insight. 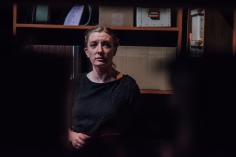 With regards to his feelings and contribution to the Manhattan Project, J. Robert Oppenheimer famously responded: “Now I am become Death, the destroyer of worlds.” While Bronowski and his colleagues didn’t work on anything of that magnitude, they had hard choices to make and secrets to keep. In Bronowski’s case, he kept his innermost thoughts and feelings under lock and key, waiting for future generations to unpick its secrets, and reappraise the man and his life.

Secret Life Of Humans runs at New Diorama Theatre until 5th May.