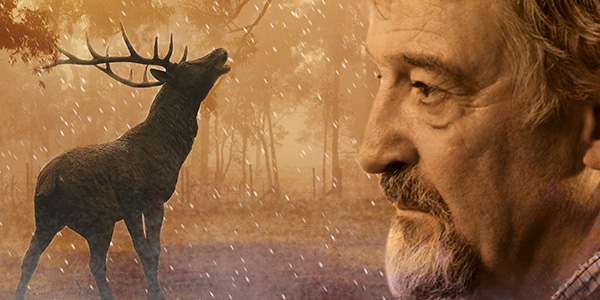 If Norman Mailer epitomised the genre-defying ‘new journalism’ with its unabashed love for pugilism, then Ernest Hemingway was the figurehead for lean, ‘masculine’ writing in the American novel, whose purpose was to be truthful… Written by Rolf Hochhuth and directed by Anthony Shrubsall, Death Of A Hunter stars Edmund Dehn as the writer in question.

When we meet Hemingway in July 1961, his assertion that the powers-that-be have bugged his home is more akin to what we would expect of Philip K Dick, than one of the foremost pre-counterculture novelists. Ironically, as a writer always in search of the truth, his hunch was correct and J. Edgar Hoover, no less, had been keeping tabs on him. Only this occured long before Hemingway went to visit Cuba.

In tandem with his suspicions, Hemingway has a lot of anger – at himself for not being able to write and at others such as his fourth wife Mary Welsh for hiding his guns – one of the few ‘pleasures’ he can still indulge him. Dehn channels Hemingway’s robust persona – fearless and self-critical, ready to take on anyone or anything.

Some people define their lives by their relationships. For Hochhuth’s Hemingway, what give his life meaning is to write. However, the ‘writer’s block’ – ‘the Nobel Prize curse’ – which he’s been wrestling with for years, has made his life untenable.

In hindsight, we know suicides in the family engender further similar actions down the line, as ‘permission’ has been granted to future genertions to do so. Prior to the play’s events, Hemingway’s father and and father-in-law had committed suicide, and years after the play’s set, so would his sister and brother. Knowing this, there’s a strong case for a genetic or environmental link to depresson in Hemingway’s family. Even without knowing all this, what’s spoken by Hemingway during his final hour suggests that he’s wrestling with embracing the ‘heroic’ traits of his protagonists – to accept the futility of fleeing death and face his fate with dignity…