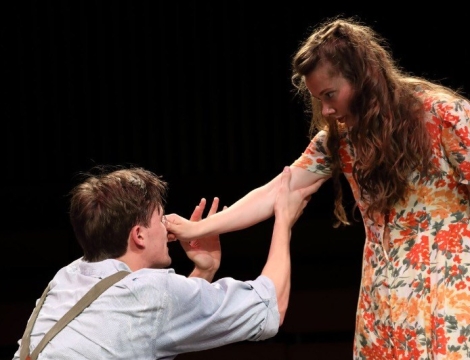 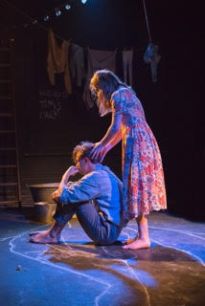 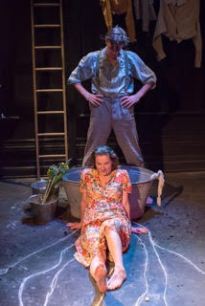 Based upon Dennis Glover’s poem The Magpies, Gary Henderson’s Skin Tight has its own lyrical quality, with certain lines and references alluding to larger ideas and themes. Set in New Zealand’s South Island during the Global Depression of the early 1930s, we meet Tom and Elizabeth who live on a farm. 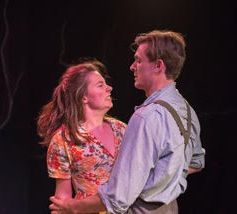 Played by Philippe Edwards and Louise Hoare respectively, our first introduction to the couple is anything but ‘gentle’ and staid. Trying to ‘escape’, Elizabeth’s efforts are ‘thwarted’ by her husband, who doesn’t hold back from using his strength. Not that Elizabeth is intimidated by this or unable to handle herself. But not everything is as it appears to be. So why is Elizabeth trying to escape? 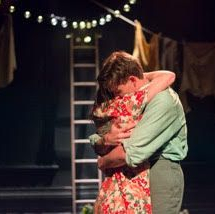 Much of Skin Tight is about remembrance – the early days of courtship and marriage, the people Elizabeth and Tom once knew, and the peaks and troughs in their lives. Undoubtedly feelings still run deep between them, but whereas Tom’s love manifests itself in doing anything to keep his wife with him, Elizabeth wants to spare Tom from what lies ahead. As they ‘walk down memory lane’ and test each other about what they remember, the ‘skeletons in the closet’ obliquely surface.

References to New Zealand’s participation in the First World War are hinted at – the ‘desert’ campaign in North Africa, as well as Gallipoli where so many young men died, scarring the national psyche. Back from the War, the deaths of Tom’s childhood friends continue to haunt him. Having travelled thousands of miles from home, the War has taught him that there is nothing glorious or poetic about watching death up close. However, for Elizabeth war is no less hellish, with fear and doubt compounded daily by the dreaded telegrams of condolences delivered locally. How does one prepare for such ‘inevitable’ heartache?

Sorrow of a different kind also plagues Elizabeth. Much as she wants Tom to face ‘the inevitable’, Elizabeth has a hard time accepting someone who was once close doesn’t want to see her in her ‘hour of need’. Life’s ‘slings and arrows’ can be stoically faced, but it’s harder to accept the capriciousness of people.

Under Max Kirk’s direction, the juxtapositon of the music with the ‘fight’/dance choreography takes on an earthy, balletic quality – the actors’ robust physicality conveying the ‘life and death’ stakes of the play. However, this doesn’t overshadow their candid, nuanced conversations that bit by bit, removes the characters’ ‘fig leaves’, until they are emotionally bare with no secrets or defences to hide behind. As for Edwards and Hoare, their committed performances elevate this ode to remembrance to a celebration of life and the memories – good and bad – that give it meaning.