“The mind is its own place, and in itself can make a heaven of hell, a hell of heaven…”
John Milton – Paradise Lost 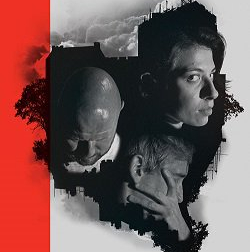 Following the end of the Second World War, ‘society’ was in a quandry. Out of necessity during wartime, women worked on the domestic front in many of the jobs that traditionally ‘belonged’ to men. However, having tasted their economic independence, the women were reluctant to go back to the status quo. For the next 10-15 years, advertisers in the US and UK tried to entice women ‘back in the kitchen’ with the lure of latest domestic appliances – the anticipated exodus would provide guaranteed jobs for ex-servicemen. But as a rule, ‘genies can’t be put back in a bottle’… In Howard Barker’s play The Castle, a similar predicament occurs where a group of men return from the Crusades to find their home ‘unrecognisible’.

Unfettered by formal hierachies, a matriarchal commune has organically sprung up, bringing sweeping changes. With no fences to speak of (a fitting metaphor if ever there was one…) people are free to go where they please. The local church is also kept closed, but far from being a pariah, Nailer (Matthew Brett) the clergyman is an accepted part of the community, now simply known as ‘Reg’. As for ‘sin’ and other spiritual matters, the only thing outlawed is the F-word (fences!) and former contemptuous terms for the female anatomy have been reclaimed.

All of this is too much to take in for Stucley (Anthony Cozens) who has been homesick during his tenure in the Holy Land, looking at his past with ‘rose-tinted glasses’. Asides from his comrades-in-arms, Stucley returns with Krak (Chris Kyriacou) – a Saracen whose family was killed by the Crusaders – whose services as an engineer are seconded, much as German scientists were used by the political superpowers during the postwar ‘space race’.

However, the ‘last straw’ for Stucley is that his wife Ann (Shelley Davenport) has adopted Skinner (Kate Tulloch) – a widow and self-confessed ‘witch’ – as her lover. Seeing everything that’s transpired as an affront to the ‘natural order of things’, Stucley comes to the conclusion that his life has been ruined by an insane, malevolent God who has no comprehension of the bittersweet relationship between men and women. The answer? The erection (pun intended) of the eponymous castle and under Stucley’s guidance, a rewritten Bible so that Christ’s *anatomy* is prominently referenced…

Barker here takes the oft-quoted argument that aspects of religion are androcentric and runs with it, highlighting how over the centuries the status quo has been peddling its own brand of dogma in the name of religion to justify its stance – whether it be ‘the divine right of kings’, the branding of outspoken women as ‘witches’ and so on.

Under the direction of Adam Hemming, Stucley’s petulance has a Monty Python-esque irreverence – absurd in his conclusions, but clearly showing his fragile mental state as he overtly tries to ‘rewrite God in his own image’. 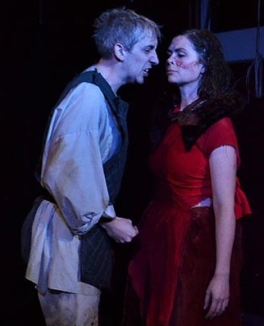 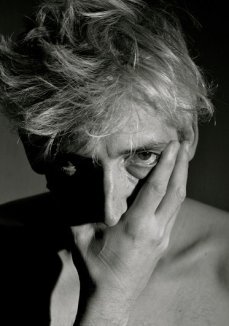 Spending time with Stucley and his right hand man Batter (Nick Pearse), Krak observes them like a sober person would amidst inebriated revellers – saying little, but making a mental note of everything that’s said and done. Even if he were English, Krak’s measured, dignified demeanour sets him apart from his captors – a quality that ‘antagonises’ the acerbic Batter and piques the attention of Ann… 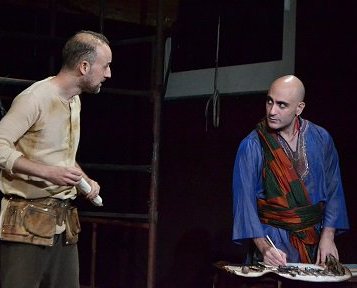 Barker also makes a distinction between men and women in terms of their philosophies regarding the environment. The ‘feminine’ approach involves harmony and believing that people are ‘stewards’ – there to take care of one’s surroundings, but not to assert ‘ownership’. In contrast, Stucley’s unnaturally high edifice exerts an influence on precipitation. By the same token, its strength and imposing stature invites challenge and conflict – an echo of the Tower of Babel, a lightning rod for disaster… 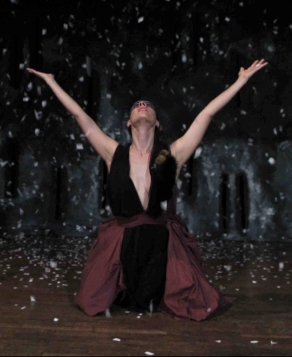 If Stucley’s response to losing his wife drives him to an ever-greater isolation, a similar pattern can be found in his ‘polar opposite’ Skinner. Relations between Skinner and Ann have been physically satisfactory, but Skinner has also had to contend with Ann’s famed fecundity – keeping the population numbers up of the predominantly female settlement by having relations with the few non-conscripted men. Consequently, Skinner feels the need to tell Ann repeatedly that she loves her, hoping Ann will reciprocate in kind. Sadly for Skinner, her feelings aren’t reciprocated verbally, as Ann interprets her behaviour as being needy and obsessive – uxorious in the extreme.

For all of the themes and layers that Barker throws into the mix, the one that resurfaces time and again is ‘love’. Notable perhaps by its absence, it’s described in various ways – from one end of the spectrum as a ‘weapon’ to a quality that permeates everything done in life and not as a thing apart. Yet in this world of edifices and hard stone, love is intangible – out of reach, just like the Knights Templar’s search for the Holy Grail.

One line from Ann sums up the ‘real’ reason why she and Stucley could never be reconciled, something that affects many relationships that end: “You haven’t changed” – the inference being she’s learnt to want different things over time, while he hasn’t undergone a similar period of growth. Much like Torvald Helmer in A Doll’s House, Stucley can’t fathom his wife’s point of view – or wants to understand…

The Castle runs at The Space Arts Centre until 28th October.