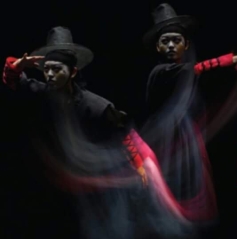 Traditional ‘theatre’ in East Asia has its beginnings in music, dance and performance (as opposed to Western-style storytelling) and Korea is no exception. Kokdu: The Soul Mate, which is currently running at the Edinburgh Fringe Festival certainly fits this criteria.

Three siblings – a daughter and two sons – argue about the division of their father’s property following his death. Their mother is also ‘at death’s door’ and it isn’t long before the Jeoseungsaja (the ‘Grim Reaper’) pays her a visit. However, her spirit can’t pass over ‘to the other side’, so she stays put – marooned, wailing…

For a show of ths nature, there are pros and cons. On a positive note, the costumes, masks, lighting and choreography make for an interesting spectacle. On a less assured note, the show is not so easy to follow – especially if you haven’t read the blurb on the EdFringe site. Attempts at humour make up a large part of the show, but they do tend to deflect from the absence of a recognisable narrative. 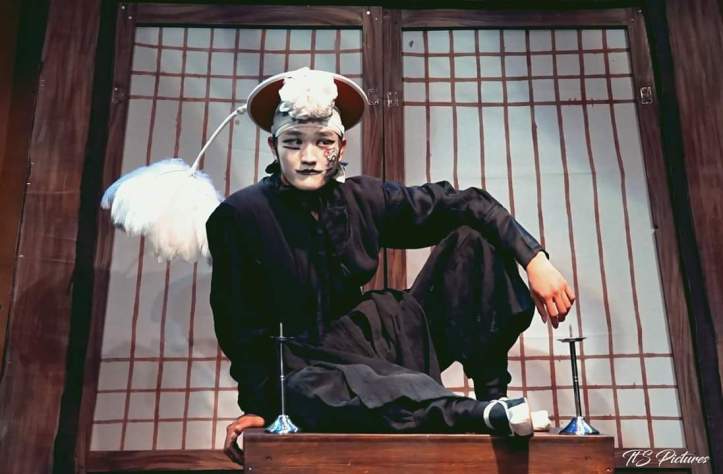 There’s nothing wrong with having a show that isn’t in English, but there should be allowances so that the audiences know what’s going on onstage. Surtitles would be ideal, but at the bare minimum a sheet of paper giving the gist of the plot and characters would have made the world of difference. On a separate note, why the incessant (imitation) hock spitting by the mother was meant to be funny, I’ll never know.

These reservations aside, Kokdu is certainly very different from a lot of shows at EdFringe ­– a curio if you will – and if viewed purely as a piece of physical theatre, will derive at lease some rudimentary enjoyment.