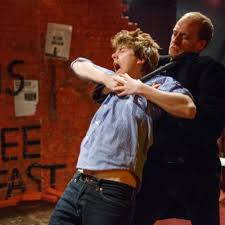 Sometimes having a story that’s been told often or has a ‘definitive’ version can be a hindrance to looking at it in a new light. The case of the Guildford Four was told in the film In The Name of the Father, but that doesn’t mean that ‘dramatic licence’ wasn’t used or liberties weren’t taken with the telling of the whole truth. Your Ever Loving (which is written by Martin McNamara and directed by Sarah Chapleo), takes a more personalised view, telling the chain of events through Paul Hill’s correspondence with his mother.

While Stefan McCusker plays Hill throughout, James Elmes portrays everyone else that directly affected Hill’s case or his time in prison. Eschewing naturalism in certain scenes, Your Ever Loving can be compared at times stylistically to the films Bronson and Sex & Drugs & Rock & Roll with its periods of heightened reality when referring to the ‘outside world’.

Culturally and politically, the 1970s and ’80s were an important period in Britain for number of reasons. What the play reminds us of is how different our perspective of this period would be if we were incarcarated, moved from prison to prison at a moment’s notice and bereft of contact from one’s loved ones.

While the events of the play took place decades ago, the climate of fear at that time, plus the media’s influence and the political pressure to find suspects all mirrored behaviour in our post-9/11 world. Watching Your Ever Loving, one realises that in terms of human nature and lessons learnt, nothing has really changed in Britain in the past 45 years. As such, it is a stark reminder that history will repeat itself if the powers-that-be aren’t held fully to account.

In the wake of bombing atrocities, the pressure to ensure swift justice is perfectly understandable, which even Hill in the play points out. However, to find someone… anyone to take the blame and to do so time and time again without regard for truth, is a greater danger to society in the long run as the erosion of civil liberties and accountability stems from within.