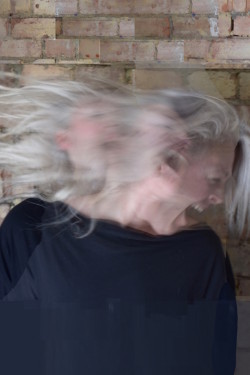 Initially laying down white, plastic ‘pebbles’ around her defined area, Sanders rises to mimic certain actions – the pounding of the chest, the deliberate striking of the wrists, all violently felt in waves throughout her body. Once she’s regained her composure, Sanders speaks to the audience divulging her name (Alex), obliquely referencing her age (29) and recent suicide attempt, plus her relationship with her niece who has the same name…

Watching Purged, I felt like I was watching a response to Sarah Kane’s work, especially 4.48 Psychosis. ‘Alex’ is one year older than Kane was when she died, surviving but still bearing the psychological scars of her self-violence. Her niece – her ‘younger’, ‘newer’ self isn’t laden with the psychological baggage, representing unfettered hope for the future. In the meantime, the older Alex has to wrestle with the echoes of the past and her own fragility….

Being an interior experience, depression is not the easiest thing to articulate on stage. However, through Sanders’ committed performance and the fragmented nature of Purged’s speech and movement, Alex’s mental state has been deftly realised.

Purged ran at the Hope Theatre, London on 5th and 6th February 2017.