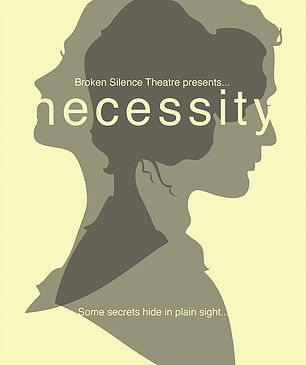 Moral dilemmas make for compelling theatre. Some are of a grand scale – or at least have wider, national implications: “My uncle murdered my father and is now king. What next?” (Hamlet). Others are of a much more personal nature: “How do I tell my gay partner that I want a sex change?” (Rotterdam).

For most of us, such conundrums are restricted to secrets from loved ones, but these can make or break the strongest of relationships. In Paul Macauley’s latest play for Broken Silence Theatre, a couple receive a letter that wasn’t meant for them – news that could potentially end their neighbours’ marriage.

Playing the younger couple burdened with the secret, Mish (Cerys Knighton) and Patrick (Tim Cook) are very different from each other in terms of personality and circumstances. While Patrick commutes to London everyday for work and spends a significant amount of time away from home, Mish has been made redundant and spends most of her time at home. She hankers to follow her ‘dream job’ and make jewellery that incorporates birthstones, but Patrick shows little encouragement in exploring this avenue.

The bombshell itself – a woman has had their neighbour’s love child throws up all sorts of questions, least of which, how, if at all, can they tell their ‘inventor’ neighbour about this? Would he leave his wife and daughter for this other woman? Patrick’s response is perhaps surprising, indifferent to his wife’s concern on the matter and more perturbed by her ‘inactivity’ and lack of progress in finding a job.

Mish and Patrick end up spending time with their neighbours, but it is very obvious that Veronica (Vicky Winning) and Stephen (Will Anderson) don’t have a marriage based on trust or constructive communication. News about the baby would undoubtedly exacerbate matters, but who and why ‘the cat’s let out of the bag’ is bound surprise some people.

Some plays leave the audience indifferent to the plight of the characters. Not so with Necessity. Admittedly, on a superficial level,  the staging of the play has been ‘simple’ with a basic set. Doesn’t matter. I watch A LOT of plays, so it takes something extra special for me to repeatedly utter “Ooh!” under my breath at a character’s decision or dialogue…

The tension in the latter half of the play is palpable – indirectly a product of Mish and Patrick’s respective points of view about whether to start a family, and how finances and readiness factor into this – has a gravitas and timelessness that engages with everyone at some level.

The cast are strong across the board, but it is the female characters who are particularly well-defined – the driving force of the play and who have our utmost interest, if not our sympathies. Hats off to Knighton and Winning on their riveting performances.

There are two other female characters, both played by Alex Reynolds, who bookend the play. While Reynolds’ time in those roles is relatively short, the characters she plays shapes Necessity in obvious and imperceptible ways. In addition, both the women she portrays have final speeches that show who really has the most power and long-term influence, to chilling effect.

Looking back on the play, I’m deeply impressed by the writing in terms of plotting and character development. I had no expectations beforehand, but I found the viewing experience of Necessity very satisfying indeed.