As a piece of digital theatre, Grey Man (which is written by Lulu Raczka and directed by Robyn Winfield-Smith) works on multiple levels. Playing the younger and older version of the same character, Kate O’Flynn and Kristin Hutchinson are Maya – a woman whose thoughts are never far away from her sister who had a gift for storytelling – able to unnerve all within earshot with tales of urban legends.

Initially the ‘scary stories’ told by Maya’s sister seem to just reflect the deep-rooted fears of women in society of men who exhibit ‘Jekyll and Hyde’ personalities. However, when the topic turns to the Grey Man and his ‘mistress’, that’s when the subtext of the duologue becomes more nuanced, hinting at not only of the dangers of predatory men, but also the potentially harmful intent of other women and one’s own behaviour.

The lodgings that both versions of Maya reside in couldn’t be more different. O’Flynn’s Maya spends her time in a sparse, monochrome room that reflects the mood of her tale. For much of the duologue though, the four walls take on a greyish hue that mirrors the diffusive presence of the eponymous Grey Man… Hutchinson’s room, on the other hand, shows the wear-and-tear of time, as well as a window covered with shreads of old newspapers. This leaves the viewer to wonder if the room is mirroring the ascetic nature of Maya’s sister or whether Maya herself has continued to live as a recluse in the same room since her youth.

The first incarnation of Grey Man was a stage play performed in 2016. So as a piece of digital theatre, what does this version of Grey Man offer? Under Winfield-Smith’s direction, there are many subtle, non-verbal clues to Maya’s state of mind, what she experienced in the past and present, plus the unshakeable sense of danger that hovers around her sister. Certainly the proximity of the camera to Maya as it pushes in denotes the POV of the Grey Man – the everpresent, unseen threat. 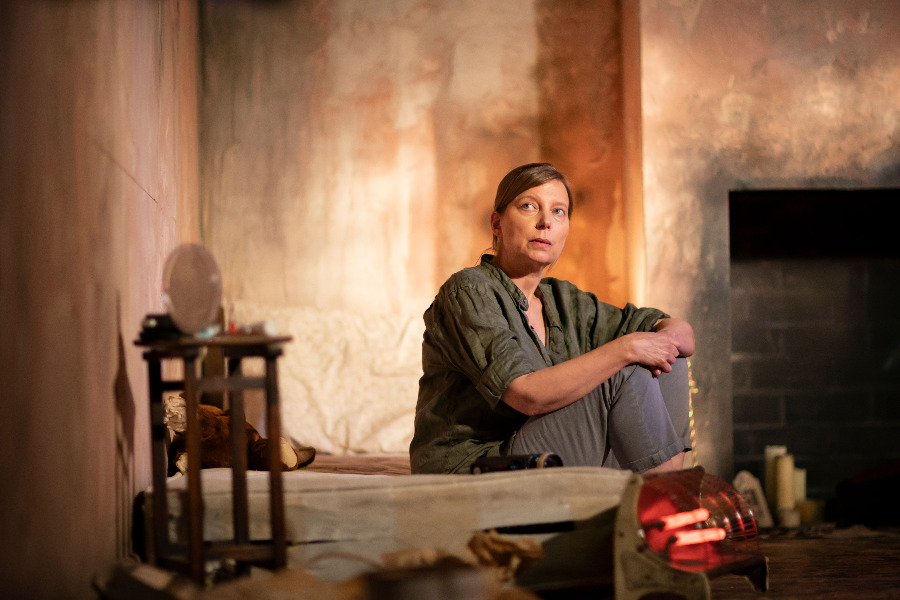 Kudos to the actors and all the creative and technical teams for taking an established, well-received monologue and shaping it into a palpable, disquieting experience.