Cuban playwright José Triana is perhaps not so well-known as his 20th century peers. However, just on the basis of his play La Noche de los Asesinos (The Night of the Assassins), audiences will find common themes from his work with other avant-garde playwrights. With this in mind, Daniel Passi’s translation and adaptation of ‘Assassins’ (Siblings) for Overtone Theatre makes its debut at The Space Arts Centre.

Written as a three-hander, Triana’s play finds Bethany Denham, Jack Tivey, Magali Jeger as the eponymous siblings. Discussing the murder of their parents, the audience is initially left wondering if this is a confession of something that has already taken place, or something that is planned for the future. The actors/‘siblings’ also play their own parents and the ‘authorities’ who would be involved with their prosecution. So what is Siblings really about?

Written prior to and after the Cuban Revolution in the 1950s, Siblings examines the complex emotions and state of mind while living under an oppressive government. The pre-Castro, Batista regime suspended many civil liberties, which ultimately led to the inception of the revolution. But the draconian measures that arose in its wake regarding press freedom gave ‘pause for thought’ for those previously sympathetic with the constitutional changes. Wanting to ‘usurp’ the status quo is one thing, but would you have the resolve to ‘do what is necessary’ and face the consequences?

Without foreknowledge of the Castro connection, an audience is perhaps unlikely to make the link with the play’s political ‘anti-authoritarian’ sentiments. They may, however, make the subliminal link between Triana’s play and Jean-Paul Sartre’s Huis Clos/No Exit. A three-hander with one male and two female roles, the trio’s fate are inextricably linked – with each person having a maddening affect on the others. Siblings also has overtures to Ian McEwan’s The Cement Garden (with the ‘absent’ parental figures), though it could be argued that McEwan’s story was partially inspired by Triana’s play.

Theatregoers familiar with absurdist plays may also recognise within Siblings’ DNA its parallels with Jean Genêt’s The Maids. Inspired by real events, the protagonists in The Maids also partake in roleplaying, constructing sadomasochistic rituals for the murder of their employer and taking it in turn to be in positions of ‘power’.

As L (Lalo), Tivey is a conduit for much of the play’s raw emotions, tasked with carrying out the murders and answering the line of questioning in court. Denham’s C (Cuca) through the various roles she plays, is closer to Lalo in age and seniority, and they also give each other the hardest time – perhaps because they are so alike. While playing their respective parents, we see that they have an intuitive understanding of their unhappiness, as much a victim of their own circumstances.

Jeger’s B (Bebe), meanwhile, has plenty of pent-up emotions, though they’re seldom directed at her other siblings individually.  She is, however, exasperated at their in-fighting, repeating the behaviour of their ‘parents’. Perhaps as the youngest sister, Bebe’s cries of anguish and sitting in judgement later denote a wish for ‘the voiceless’ to finally have a say in the running of things. 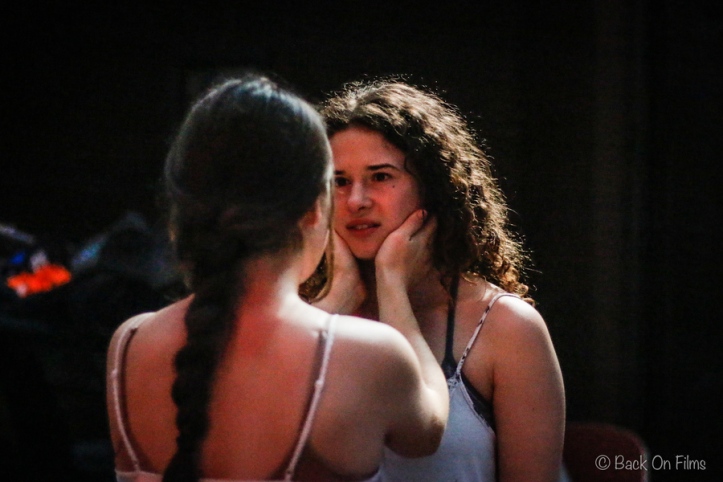 If one watches Siblings as a form of psychodrama, the overtures to Greek tragedy are very apparent, with the conflict between family members and their search for catharsis. However, anyone familar with the genre knows that truth, justice and reconciliation are seldom bedfellows within the narrative, and no provision for easy answers.

Accompanying the actors onstage on the piano, Benedetta Scuto’s renditions of Rachmaninoff, Chopin, Mozart and Beethoven accentuate the non-verbal tension between the characters and their off-kilter way of looking at the world.

Siblings ran at The Space Arts Centre from 9th to 13th August.