Fairy tales have for centuries been cautionary stories, hinting that behind the glamour of ‘dreams’ and ‘wishes’ lie inherent dangers. Nowhere is this more true than the story of ‘Little Red Riding Hood’, where the onset of adolescence in girls attracts the attention of ‘wolves’. In Caperucita (Spanish for ‘Little Red Riding Hood’), the parallels with Latin ‘Dreamers’ making the perilous trek northwards and those who would prey on them are vividly enunciated. In keeping with the allegorical references, Caperucita straddles the boundaries between unvarnished reality and poetical symbolism.

The short play primarily focuses on ‘Les Madres’ – women in an El Salvadorian village who supply food and clothing to young travellers riding on the northbound ‘el tran de la muerte’ (‘train of death’). As a mother who has sent her own children on this train in the past, Irene (Fran Olivares) is forever reminded of their initial exodus – and their likely demise. As for ‘Red’ (Larisa Muñoz), she is a ‘veteran’ at travelling to the United States border, making her first attempt at the age of 12 and her second at the age of 14.

Both women discuss ‘Lucas Lobos’ (Duncan Hodgkinson Legoux) – a man with a wolf tattoo who purportedly guarantees safe passage into the United States for a fee – and we hear two very different opinions about him. For Irene, he is like the ‘bogeyman’, an ominous figure that looms large in her fears and those of the collective consciousness. In contrast, ‘Red’ has ‘made peace’ with the fact that he is – or at least thought he was – a ‘necessary evil’, the price to pay for reuniting with family Stateside. Certainly for her, the ‘mystique’ of the wolf has dissipated, but having first-hand experience of him, she nevertheless has a ‘healthy respect’ for the danger he poses to anyone thinking of emigrating.

While ‘Red’ and many others have their hearts set on being permanent residents in the States, they are only too aware how the current U.S. administration – and indeed some of the general public and law enforcement agencies – perceives them negatively. However, others’ perception of their self-worth doesn’t deter their aspirations. But what of the ‘Wolf’ himself? Does he see himself as the villain of the piece or performing a necessary function? An off-the-cuff remark about the blue colour of the Wolf’s eyes suggests that he’s not a native of Latin America – an opportunist who preys on the desperation of migrants who want to traverse the desert or sea safely. As someone without an ally in the play, he confides to the audience about the nature of his business and the role money plays in his ‘vocation’. The candour of the unapologetic ‘smuggler’ has a Shakespearean veneer, though the oblique, ‘poetic’ way he describes his circumstances obfuscates (perhaps to himself) the ramifications of his actions. 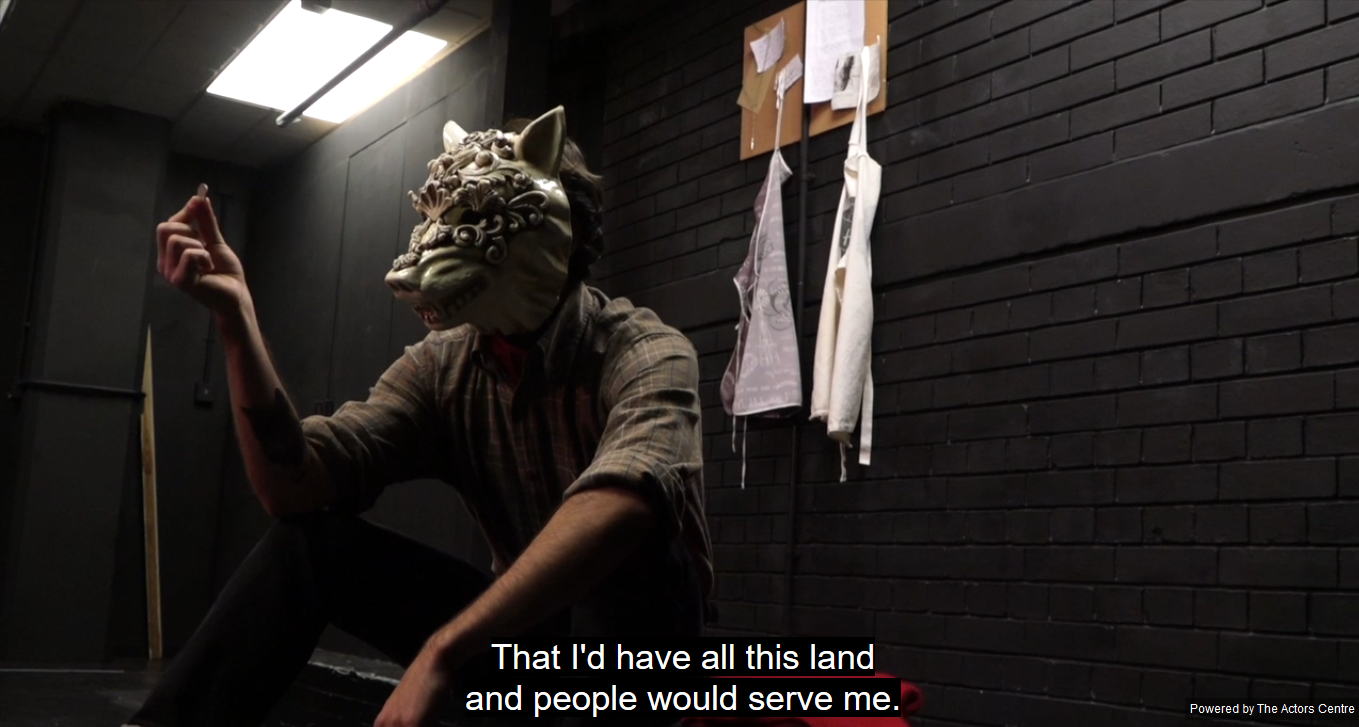 While the play addresses the hopes and fears of those seeking to escape destitution (and achieve a better life), much like the fairy tale it mimics, Caperucita through its choreography and poetic use of language evokes a Lorca-esque quality to the proceedings.

Caperucita is a work-in-progress production. Streaming from 13 – 29 November.
Tickets: £3