Hope is like the sun. If you only believe it when you see it you’ll never make it through the night…

Broken Britain. In the not-too-distant future, hope is a scarse commodity. As for the environment, gas masks have become a necessity in the open air. Phone helplines such as Brightline exist here, but funding is rapidly drying up, which will leave many to suffer alone. But what sort of person volunteers to work in such helplines and how they do they sustain their own mental health?

Written by Sam Steiner and directed by James Grieve, You Stupid Darkness! focuses on four individuals who work at Brightline between the hours of midnight and 4am every Wednesday morning. Each of them have very different temperaments and reasons for being there. Frances (Jenni Maitland) is the most senior member of staff and in her final trimester of pregnancy. She has a optimistic, cheerful disposition (some might argue excessively so), but she’s also a stickler for ‘boundaries’, for not letting the staff get too emotionally involved with those who call or letting staff take home the ‘baggage’ from the shift.

Then there’s Angie (Lydia Larson). While she has only been at Brightline for six-months, in terms of experience of dealing with less-than-pleasant callers, she’s a seasoned ‘listener’. Angie’s only ‘flaw’ (as far as Frances is concerned) is her ‘inability’ to pry herself from the callers within a ‘reasonable’ time, plus ‘oversharing’…

As for Joey (Andrew Finnigan) – the 17-year-old work experience placement – both women take a liking to his easygoing nature, and find his relative ‘innocence’ and eagerness to help refreshing. But while Joey reciprocates their feelings of acceptance, he finds Jon (Andy Rush) a welcome presence. Unafraid to counter Frances’ firmly-held views on ‘positivity’, Jon’s opinions are tempered by the realities of life. 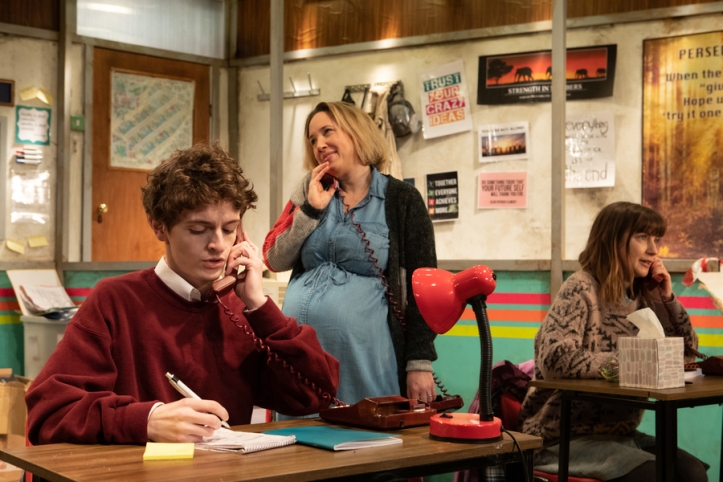 In terms of the play’s themes, empathy features prominently and a prequisite for working as a helpline volunteer. But asides from this, emotional sensitivity is shown to be a ‘double-edge sword’, as abusive phone calls and people who they’re powerless to help take their toll on one’s mental health over time.

Maitland’s ‘Frances’ (who is almost David Brent-esque in terms of the dissonace between how she thinks she’s behaving and how people react to her) is at least aware of the notion of ‘helping others’ by caring for oneself too and why she’s so vehement about the shifts ending with a ‘debriefing’ session. Ironically, as things build up over the course of the play, the staff are less inclined to talk about the undercurrent tension on the premises… 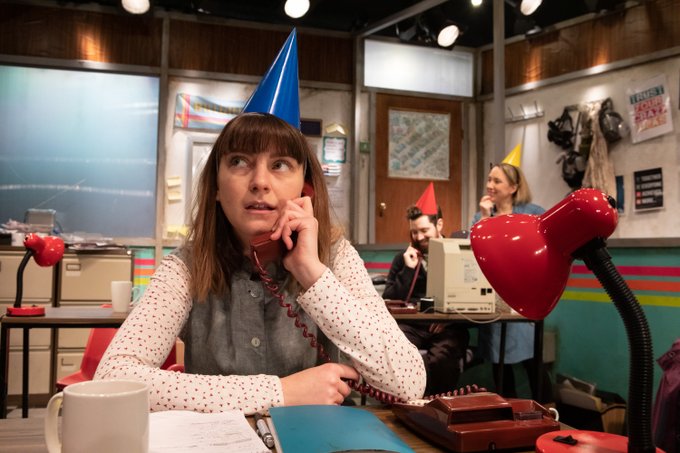 In contrast, Larson’s ‘Angie’ is the most naturally funny of the foursome, whether it is her facial expressions, her proclivity for coming out with the unexpected or her unusual way of looking at the world. As for Rush’s ‘Jon’, while he often speaks at the top of his voice when he enters a room, there is much more to him than being a ‘noisy’ presence. Many of the developments in the play are an offshoot of his personal life and the way they ‘bleed’ into the weekly shifts.

In terms of the set, Amy Jane Cook’s design is spot on with the dilapidated surroundings, whose holes and cracks are covered up by ‘inspirational’ posters – an apt metaphor for the circumstances in the play. 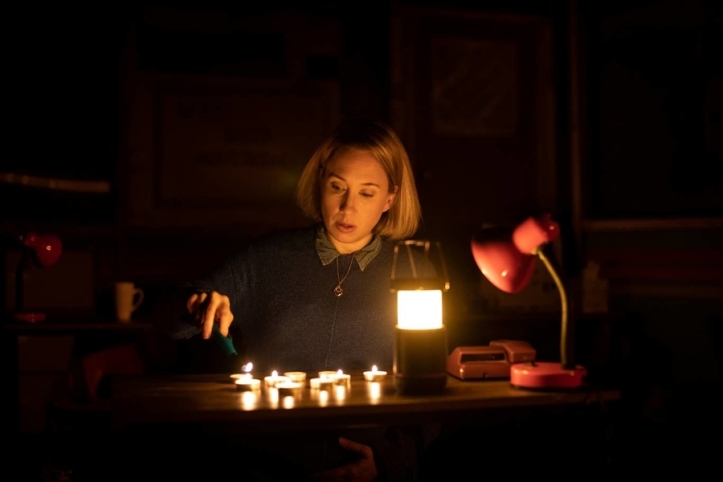 You Stupid Darkness! is very ‘British’ in the sense that the comedy and the pathos are inextricably intertwined, the bitter with the sweet. Addressing the notions of positive thinking versus a realistic outlook, the play isn’t afraid to question whether there is a time and place where emotions demand to be felt, as well as highlighting how counterproductive outside interference is on one-on-one connections.

You Stupid Darkness! runs at Southwark Playhouse until 22nd February.