“The greatest sin… is to be too late.”

Directed by James O’Donnell, Frank McGuinness’ The Match Box, is an in-depth examination of parental grief. As the mourning mother in question, Sal (Angela Marray) is a solitary figure who ‘on paper’ belongs to a family… a community, but in reality lives a world apart. The play doesn’t rush into the ‘meat’ of the story. Instead, through Sal we hear a series of anecdotes that segue into each other. While they appear at first to be unrelated to the later plot, they subliminally demonstrate to the audience the forces and events that have shaped Sal’s thinking and decision-making.

Looking back on her life, from the solitude found on the isle of Valentia (off the coast of Ireland) Sal has all the ‘peace and quiet’ a person can possibly want – except that even ‘nature’ seems to know what’s going on in her restless mind and about her past.

With any one-person play, the audience has to always ask is the character a ‘reliable narrator’? Are they 100% honest with the audience and more importantly, with themselves? Certainly Sal believes in the things she ‘hears’ and that she’s compos mentis. The question is, do we believe ‘everything’?

A meditation on matches and their associations with a ‘kind’ girl from school leads to Sal reflecting on whether ‘good’ (as a karmic force) guarantees others will rally to you in your hour of need, and the role of chance or ‘fate’ in one’s life…

As the daughter of Irish Catholic parents, Sal’s teenage years were of the ‘standard’ variety – walking the tightrope of conformity and rebellion. A teenage pregnancy could have meant permanent estrangement from them, but support emerges from the most unlikeliest of places… In terms of Sal’s other relationships, as a mother, she talks to her friends from work about her ‘headstrong’ daughter, but she doesn’t always agree with them about ‘the way things are’. ‘Communication’, and being unable to comprehend others’ choices and points of view is a common thread in Sal’s life (and the play as a whole). 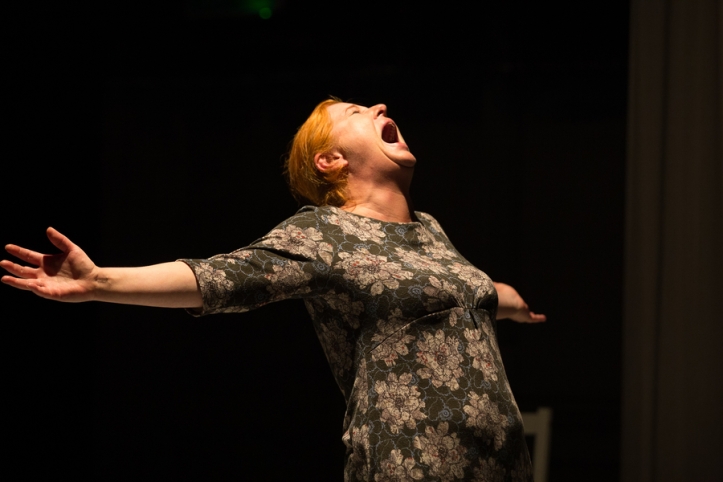 As the play ‘hits its groove’, it delves into the behaviour of people when they are grieving, versus what is expected and ‘acceptable’. At times when communities are reeling from senseless deaths or atrocities committed, the act of forgiveness can be a ‘subversive’ thing to choose. But in a country that adheres to nominal religious observance and a long history of partisan violence, such sentiments are unfathomable, unreconcilable. Can absolution be granted to someone who isn’t contrite?

Obliquely, the play contrasts secular wisdom on such matters with the ‘spiritual’. That said, her family and local community gravitate away from the reconciliatory precepts of New Testament to the time-honoured “eye for an eye”. That would be ‘natural’ justice…

Running at close to two hours, The Match Box is a tour-de-force performance from Marray, who exudes Sal’s subdued pain and philosophical nature – a demeanour shaped by the slings and arrows of time. Always earnest, but seldom thought of without judgement calls being made, Marray’s Sal is a reminder that beneath the calm surface, the embers of anger and pain burn ever bright…

The Match Box runs at the Omnibus Theatre, London until 17th November