If a nation could be said to have a ‘soul’, Argentina’s anima and animus were represented by Eva Perón and Che Guevara in the 1950s and 1960s. Capturing the imagination of the disenfranchised, their popularity within Argentina and South America eclipsed their ‘appraisal’ by the outside world, where politics was traditionally less about the ‘cult of the individual’ as the political parties public figures represented. During her lifetime, Perón was bestowed the title “Spiritual Leader of the Nation” by the Argentine Congress. Asides from irking her detractors no end, Perón’s official status as a quasi-religlious icon raised her in the eyes of some on a par with the Virgin Mary or the progenitor of the ‘sang réal’ bloodline. With the militia in charge in Argentina after Perón’s untimely death, efforts were made to move her body from place to place, beyond the reach of the masses… Written by Eva Halac and directed by Luis Gayol, Irish Coffee takes place in the aftermath of Perón’s death when rumours circulated regarding her final resting place.

Leading an investigation into the whereabouts of Peron’s remains, Rodolfo Walsh (Fergus Foster) and Tomas Eloy Martinez (Giorgio Galassi) have very different reasons for pursuing this story. Through various means, they hope to flush out the ‘truth’ about Perón from the plethora of rumours. The person who does know the facts, however, is Colonel Carlos Eugenio de Moori Koenig (Gary Heron). A well-known figure, he and wife (Sally Ripley) have born the brunt of attacks on their home – the latest incident has resulted in the hospitalising of their daughter. Suffice to say they are very apprehensive about the press, phone calls, visitors or anything that could be construed as ‘intrusive’.

As people and as journalists, the play shows Walsh and Martinez exhibit very different personalities and attitudes towards their ‘craft’. For Walsh, the integrity and purity of their methods is something to strife for. Martinez, meanwhile, who writes review for films rather than ‘serious’ political pieces takes a Durkeimian view of ‘reporting’ and sees ‘reporting’ as a way of deconstructing ‘myths’ that are interwoven in the fabric of culture. At the end of the day, he hopes to tell a narrative that ‘feels’ true’. In other words, ‘don’t let the facts get in the way of a good story…’

On the other side of the equation, we see the Koenigs with their respective ‘coping mechanisms’: the Colonel with his heavy drinking and his wife chatting with ‘normal’ people like her driver Romone. In the end, husband and wife talk individually to the journalist they think they most have an affinity with. Neither party is quite what the other expects, but then ‘reality’ is often more disapponting than ‘expectations’…

In terms of the play’s themes, it’s focus (or lack of…) on the importance of ‘truth’ resonates with today’s political climate – not only with poiliticians themselves, but of newspapers that forsake neutrality for sensationalism and poiltical bias. 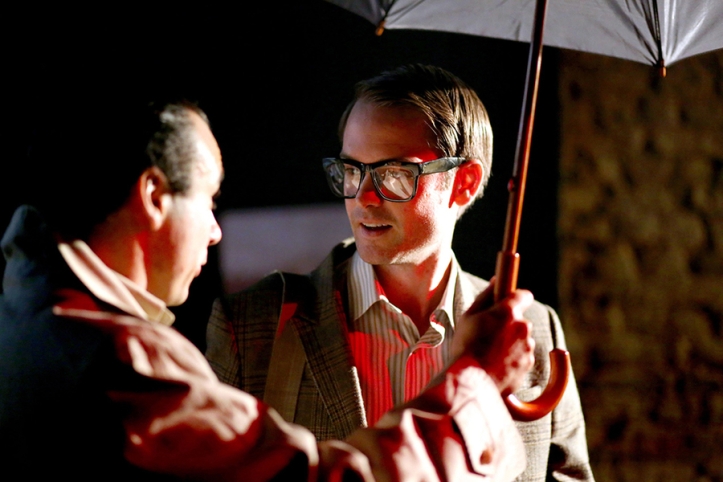 Galassi captures the ‘cynical’, flexible attitude’ to guaranteeing ‘news’ stories can be sold, whether it be planting rumours himself or the lack of aversion to using fiction where ‘appropriate’. Foster’s Walsh stands apart from the stereotypical Latin temperament and very much a Graham Greene-esque protagonist – the epitome of the principled English civil servant abroad. Heron’s Colonel appears at first to be withdrawn and unshakeable in his resolve. But as we get to know him, we realise how the circumstances he faces ‘validates’ his previous course of action. However, with his family made a stationary target while Perón is ‘free’, this is more than he bargained on… As for his wife, Ripley’s Mrs Koenig visibly tries to equate meaning in the present events with her own feelings and finds they’re irreconcilable. Now she has to do something to shake-up this paradigm.

So what of the play’s enigmatic title? It lends itself to the interpretation that what you think you see isn’t necessarily what’s on offer…