We Anchor In Hope, The Bunker – Review

The pub is a British institution. Sure, other countries have ‘bars’ where adults consume alcohol together, but in Britiain its centruries-old history encapsulates so many things. Playwrights such as Simon Stephens and Barney Norris have in the past taken the setting of the traditional pub and by its use, tapped into a shorthand for community, nostalgia and an unadulterated slice of life. However, their disappearance from the high street  – only to be replaced by luxury flats or bar chains – are a perennial reminder of the passage of time and how some things are beyond our control… Written by Anna Jordan and directed by Chris Sonnex, We Anchor In Hope is set during the last day that a pub in Pimlico, London is open.

First on the scene is barmaid Pearl (Alex Jarrett), cleaning up The Anchor after its penultimate evening. Almost everyone who was there 12 hours earlier is feeling the worst for wear. Bar staff Kevin aka ‘Bilbo’ (Daniel Kendrick) – who lives on the site with landlord Kenny (Valentine Hanson) – is surprised that The Anchor is open for one more day of trading. The bar staff needn’t worry about clientele turning up – the die-hard customers who were there for the official farewell festivities make an appearance.

First in, Frank (David Killick): a longstanding customer, who was best friends with Kenny’s father – The Anchor’s previous landlord. He spends so much time there, it’s a wonder he spends any quality time at all with his wife Joannie… Then there’s Shaun (Alan Turkington) who works on a number of high-profile engineering projects – from the Northern Line extension to Battersea Power Station. He has a platonic but close friendship with Pearl – sharing musical tastes on Spotify, and taking ‘advice’ from her about fashion and what’s ‘in’.

When Kenny eventually arrives, the reality of the situation sets in hard, leading to impromptu decision to close the doors early and have a ‘lock-in’. After all, whatever alcohol is on the premises will be disposed of by the brewery. “When it’s gone, it’s gone.”

In terms of the way the play’s staged, the set is decked out as an authentic pub and very much a character in its own right. With a fully working bar, the audience can purchase drinks from there before the show begins and during the interval. There are also post-show events including pub quizzes, karaoke nights and music. But I digress. 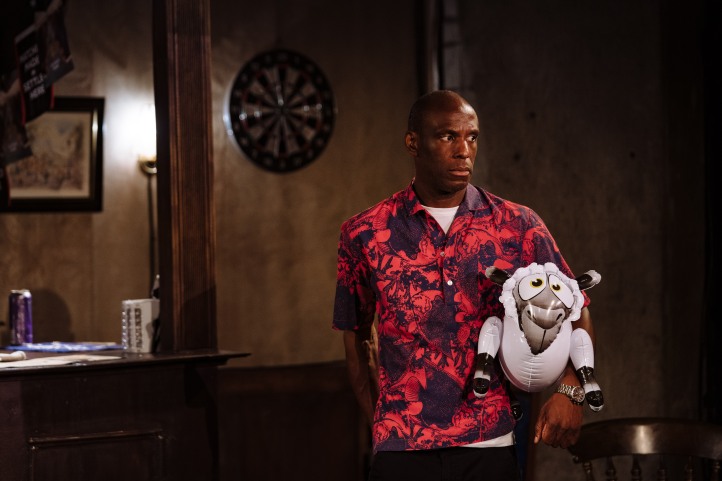 As a character, Kenny arguably shows the most diverse range of good and bad facets throughout the play – a tragi-comic figure who is generous, but also (in his own eyes) a ‘victim’ of the choices he’s made and the ‘groove’ that life has placed him in. If ‘misery loves company’, at his lowest Kenny will help to shine a light on ‘the unsaid’ and bring people down his level…

With a nickname like ‘Bilbo’, Kendrick’s Kevin was never going to be one of life’s alpha males. However, the subtle hints that the play supplies about his past doesn’t prepare the audience for how emotionally-charged the events to come are or how much of a survivor Bilbo really is.

Meanwhile, Killick’s Frank straddles the line between incorrigible and the voice of experience. However, the emotional heart of the play lies in the ‘will they, won’t they’ relationship between Pearl and Shaun. On the surface, in terms of age and background, they have nothing in common… Except the one thing at the core of their identity is their sense of duty and responsibility – Shaun earning a wage in London to provide for his family in Liverpool and Pearl (in true Ab Fab style) keeping her errant mother on the straight and narrow. Not so much a ‘mother’ as a former beauty who was well-known at The Anchor decades before and prone to impulsive behaviour. Luckily for Pearl, she isn’t like that – or is she…?

One of the ‘truisms’ that We Anchor In Hope touches on is the perception of one’s problems. As a result of the imminent closure, each character has something they have to contend with that they feel is particularly grim. However, everybody else sees the others’ plight in a ‘benign’ light – as less severe than their own worries.

If there’s one thing that links this play to others that Jordan has written, it’s her appreciation of humanity. In John Steinbeck’s The Grapes of Wrath, he says through the character of Jim Casey: “There ain’t no sin and there ain’t no virtue. There’s just stuff people do. It’s all part of the same thing.” That’s a very apt description of what Jordan brings to the table – relishing in the spectrum of human behaviour. In many ways the ‘heir apparent’ of the late-John Sullivan, Jordan finds humour, conflict and pathos make natural bedfellows.

We Anchor In Hope runs at The Bunker Theatre until 19th October.