Ask people below a certain age what palliative care is and there might not be recognition for the term. But as one gets older, and family and friends succumb to the effects of time, there is greater awareness of end-of-life care – an appreciation of its importance… Written by Harriet Madeley and directed by Max Barton, Crowded Room’s The Colours is a piece of verbatim theatre, based on conversations with patients, doctors and nurses at Velindre Cancer Centre and Ty Olwen Hospice in Wales.

As the backbone of the play, the story of Jill and Joe is the gateway for audiences to understand the emotions involved in such circumstances. Performed by Morfydd Clark and Ché Francis, they convince us as a couple who despite being opposites in temperament, complement each other and can provide solace the other needs in times of crisis. In contrast to this couple there is Claire-Marie Hall’s Erica. Vivacious by nature and loved by those that know her, Erica chooses to face her treatment on her own. Her circumstances highlight an unsaid truth – that a terminal disease is harder for the loved ones to deal with than the person ‘affected’ and that those undergoing treatment find themselves have to be emotionally ‘strong’ for others’ sake. 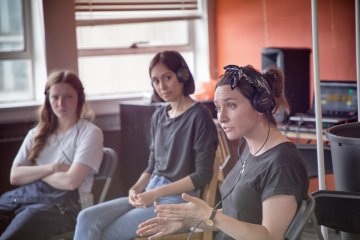 Completing the cast are Crowded Room founders Harriet Madeley – who apart from writing the show, plays a therapist at a hospice – and Mark Knightley who performs as Max, an elderly resident contending with Motor Neurone Disease.

Complementing the conversations on stage are motifs and actions that reinforce the sense of the ebb-and-flow of time. The opening vignette where each of the cast contributes to a soundscape of the sea, subliminally prepares the audience for the notion of finding a sense of peace in all circumstances – to be at the eye of the storm, but unswayed by fear.

The other motif that is used throughout the play is the ‘hourglass’. A raised drum upstage has a small opening where sand trickles out throughout the performance. The sand is collected below and the actors during the show matter-of-factly refill the drum with small containers of the sand – ‘clawing back from the inevitable’ increments of time – one day or hour at a time…

Theatre at its best does more than provide an entertaining narrative. While ‘recorded delivery’-style performances are not in themselves a guarantee of a successful show, under the sensitive and intuitive hands of Crowded Room, their measured use – in conjunction with emotionally-resonant themes – elevates the medium and always has something to say about the human condition. Theatre for the soul.