In 2011, Steve McQueen’s Shame dealt with one man’s nadir, whose obsession with watching porn and sex in general reaches saturation point. Very much a bellwether, it acknowledged that with ‘sex on tap’, the boundaries between erotica, our relationships and our working lives are blurring, leading to ‘complications’… Written and directed by Oli Forsyth, Such Filthy F*cks explores taking pornography ‘out of the equation’ after intense use since adolescence. Luka (Alice McCarthy) works at a research lab that deals with finding cures for life-threatening diseases. At times, this has led to her running the lab when her boss is away. But during periods of high activity and stress, Luka finds solace in watching pornography – not just a ‘bit’, but hours and hours of it.

Jules (Luke Murphy) is also a prolific user of pornography and by chance, crosses paths with Luka. While their initial night together isn’t a resounding success, their mutual pastime provides an unusual catalyst for bonding and an exceptional level of trust develops between them. However, when they both decide to ‘kick the habit’ for a week and go ‘cold turkey’, they find their resolve isn’t as strong as they thought it was…

Asides from playing the principal characters, McCarthy and Murphy play the other people in the couple’s lives who they respect or of signifcant importance. These people are also a window into Luka and Jules’ respective pasts. Luka initially sees a therapist to talk about her ‘compulsions’ and coping strategies, but is told that her time with Jules is counterproductive for her ‘recovery’… There is one family member who she may turn to, but they’ve been estranged for years…

Taking inspiration from the ‘12 Steps Programmes’ for addiction and the reliance on a ‘higher power’, Jules visits a member of the Anglican clergy for ‘spiritual counseling’. However, the uncompromising opinion offered on Jules’ ‘predilection’ is treated as a weakness of character, rather than true addiction. This lack of comprehension of Jules’ circumstances dovetails into a shortfall of empathy. At the end of the day though, regardless of what ‘feedback’ they get from others, the only people Jules and Luka have who truly understand without judgement are each other.

As Luka and Jules, McCarthy and Murphy create ‘flesh-and-blood’ characters who are flawed, but one can empathise with. In the case of Luka, her complicated relationship with her boss/friend at work gives context to her ‘need’ to ‘switch off’ from the unpleasant or unsatisfactory aspects of life. 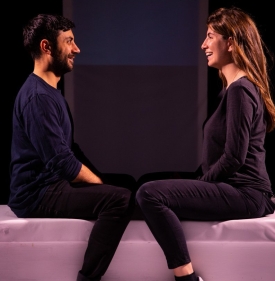 As a counterpoint to Luka’s willingness to talk about her ‘tastes’, Jules needs coaxing to open up about his ‘private time’ online. While Luka’s ‘format of choice’ are gifs, for Jules it is web cam girls – the closest thing he has to engaging one-to-one in ‘real’ sexual relationships. He also in his way, thinks he needs to exhibit a ‘duty of care’, so that these women who ‘know’ him are addressed correctly. By ‘teaching’ Luka about the etiquette of interactve porn, it opens her eyes to what makes him tick, as well as an understanding for the yearning what is imperfect, but ‘real’.

So where do they go from here?

Such Filthy F*cks runs at the Vault Festival until 17th March.