Katy is a 15-year-old girl from London. Old enough to see certain films, but legally still ‘a child’ in many ways. For a time there’s just been Katy and her mother living together. That all changes with the arrival of Brian, who seems intent on making himself a permanent fixture in their home… Luckily for Katy, she has her new boyfriend who she can spend time while her mother is ‘loved-up’. However, Brian’s way of ‘showing affection’ in private is to be very ‘hands on’…

Written by Hayley Wareham and directed by Chris White, Bottled focuses on a scenario that’s familiar in modern families. Playing the role of Katy and an assortment of other characters, Wareham, Alice Vilanculo and Isabel Stone bring a fluidity to the proceedings. Sometimes they respond in the capacity of a ‘Chorus’, sometimes only one person performs a character and sometimes all three actors play the same person – echoing and showing variations of the character’s behaviour. 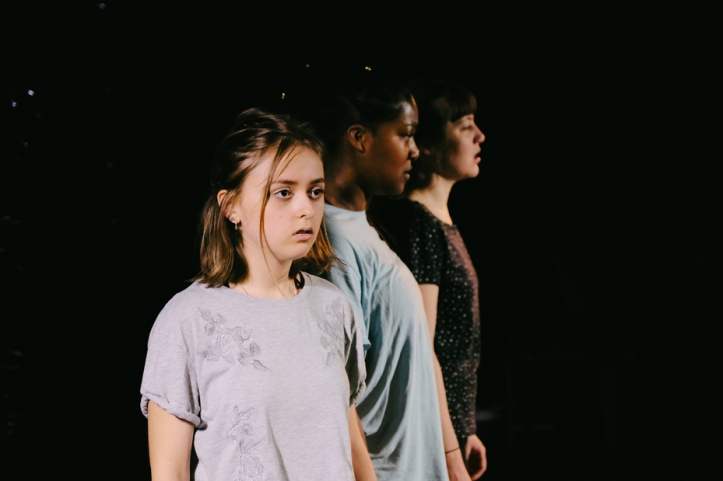 The way the play begins, Wareham immediately grabs our attention with Katy’s choice of images and words that are both familiar and idiosyncratic – an example of her lateral thinking. While Katy is preoccupied with the usual rites of passage of teenagers her age, the cracks in her mother’s marriage are there for the observant to see. Faced with the prospect of ‘behaviour’ crossing a particular threshold, Katy has to think beyond her own ‘wants’ and ‘needs’, and look at things from her mother’s perspective.

While not a conventional coming-of-age tale, it’s possible to trace Katy’s development and growth as a person through the negative experiences in her life – her last memory of her father, the ‘truth’ about her boyfriend and her stepfather’s ‘duality’… ­

The play vividly portrays the reality of living with ‘the enemy within’ and how ‘easy’ it is for those facing domestic violence to reach women’s refuges when the decision is made.

Although the comparison is a little askew, the path that Katy and her mother make is their own ‘Thelma & Louise’ moment ­ – having only each other to rely on and routinely challenged about what they would do to be free…

Bottled runs at the Vault Festival until 17th February.

The performance of Bottled on Sunday 17th February is followed by a free post-show talk with a speaker from the charity Women’s Aid.