“You may think you’re Hufflepuff, but you are Slytherin, my friend.”

Kimberley Nixon who plays the eponymous role never refers to her ‘real’ name (who I shall refer to as ODR), but in many respect, that isn’t important. While ODR’s story is very specific, aspects of her experience are universal in terms of the negative responses she’s had online.

There are two topics that permeate throughout ODR’s monologue: privilege and guilt. From an early age she has loved poetry, especially the work of Philip Larkin and TS Eliot. However, the likes of her friend Penny – whose politically-correct views stem not from a place of enlightenment, but a tool to browbeat people with – have made her feel guilt about her identity, use of language and her way of thinking. ODR’s retroactive observations regarding this are at times fuuny, but beneath the surface her anger is palpable.

There is, however, one thing that ODR is unapologetic about and that’s her love for Richard Curtis rom-com films, and moderates an online fan forum that she’s set up. Ironically, her ‘zero tolerance’ for comments about Curtis’ films that are anything less than positive are in sharp contrast to her own behaviour later in the play… 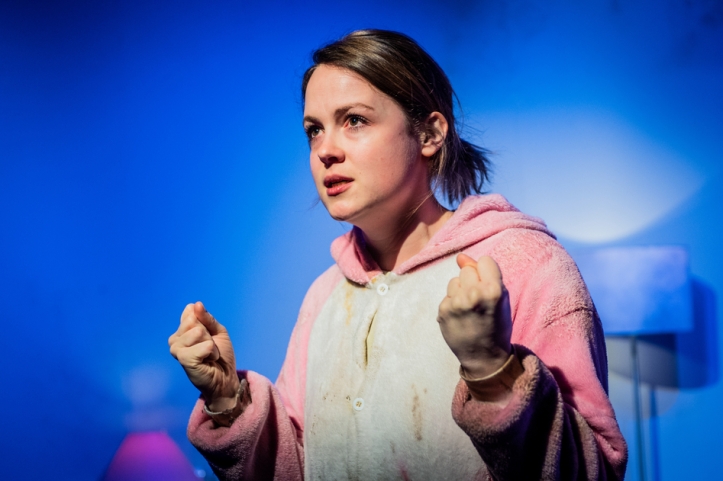 Through Heiney’s writing, we see how seemingly disparate events have over time have led to ODR wearing the pink onesie rabbit suit and the deterioration of her mental health. Heiney writing is also rich in detail – not just the minutiae in ODR’s lfe, but in terms of literary references and allusions that add extra texture to the prosaic discourse. Equally praiseworthy is Nixon’s tour-de-force performance, who on a flip of a dime can switch between disquiet and ‘attitude’, but also during the moments of greater gravitas, instinctively knows when ‘less is more’.