In the late-1960s, the occult went ‘mainstream’. While authors like Dennis Wheatley piqued the interest of the general public with his take on the supernatural, figures such as Anton LaVey establised the Church of Satan and published his book The Satanic Bible. Around the same period Rosemary’s Baby was a box office success and within some corners, the occult was touted as an alternative lifestyle that fitted in with the counterculture at the time. However, the advent of Charles Manson at the beginning of the 1970s highlighted the danger of cults and during the decade (which would be synonymous with serial killers), the optimism engendered by the ’60s all but evaporated… Written by Kim Newman and directed by Phil Lowe, Magic Circle is set during this period, when the counterculture was still very much in the ascendency and those involved with law enforcement find the old rules don’t apply anymore.

On the site of a former crime scene, university lecturer Harry Cutley (Michael Shon) sits within a chalk circle on the floor. The circle itself mirrors another example on the wall – 13 symbols around its circumference, that are similar but different to the zodiac we know. Cutley has an assortment of items to accompany him during his self-imposed stay: a cushion, a flask of tea, a ‘roll up’ and an athame (ceremonial blade). But before he can finish reciting his incantations, he notices another presence in the room – that of Inspector Nicholas Gammell (James Hyland).

Their early conversations revolve around sounding each other out regarding why they are there, with Cutley initially on the defensive. However, as their conversation progresses, circumstantial evidence suggests the reasons for Gammell’s presence may not be so straightforward.

While it’s obvious that Cutley is performing a ritual, why he’s summoning the forces of darkness is a different matter. Through the play’s exposition we find out that one of his students performed a ritual which preceeded the “unlawful killings” there. The ritual also left a ‘door’ open, whereby a primal, malevolent presence – akin to the ‘Old Ones’ of Lovecraftian mythology – passed through, Its serpentine movement is still audible to those who are ‘attuned’ to the preternatural…

Shon’s Cutley, for the most part is confident and assured, taking Gammell’s line of questioning in his stride. The one thing that does worry him is inadvertently smudging the ‘magic circle’ and breaking his protection – an observation Gammell picks up on. Meanwhile, Hyland’s Gammell is very much (in a good way) like Ronnie Barker’s ‘Fletcher’ in Porridge – a down-to-earth personality who doesn’t let on what ‘cards he’s holding’. Many of the cultural references from the period are spoken by Gammell, which if you know anything about the period, are hilarious. Gammell is also very much a man of his time, and his opinions and hunches reflect a world before the advent of modern criminal psychiatry, which is ill-equipped to deal with the ‘non-mundane’. Still, Gammell has read up on Cutley and even if he doesn’t completely understand the metaphysics behind his rituals, he has a measure of the man he’s dealing with… 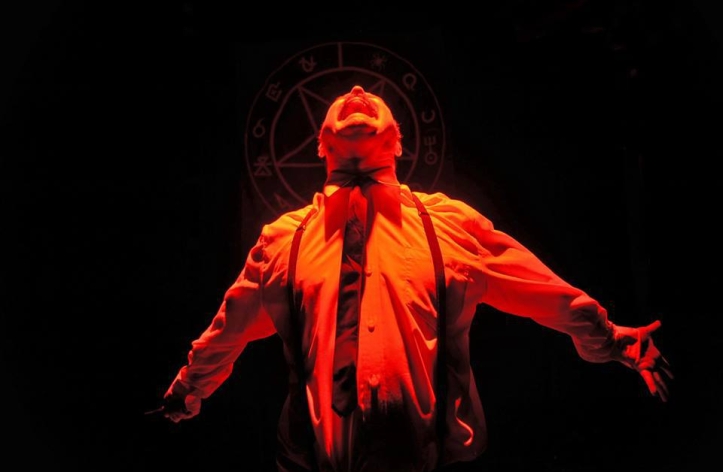 No tale of the supernatural is complete without a twist, but suffice to say anyone who assumes they’re the next Aleister Crowley and thinks they can “Do as though wilt” in matters of magic, should be aware there’s always a price…