The recent Windrush scandal has laid bare what has long been understood by inner-city communities in Britain – that with the powers-that-be, there is an unspoken crypto-agenda, upholding ‘community profiling’. While some have argued that the nationwide riots in 2011 were copying the outbreak in Tottenham, it certainly wasn’t the first of its kind. Back in the early 1980s – again under a Conservative government – the ‘stop and search’ powers the police had were used disproportionately in Brixton, leading to tensions in the community. Devised by Monument Theatre Company and based on eyewitness accounts, Windrush Square focuses on one family who live in Brixton during Thatcher’s tenure in power.

Head of the Johnson household is Elijah (Abayomi Oniyide) who also acts a community leader. Living with him are his three children Isaac (Sirach McLeish), Romy (Deslie Thomas) and Naomi (Nadeyne Lewis), plus his mother Joyce (Romy Iris Conroy). The ambience in Brixton is strained as “sus laws” – which entitle the police to stop and search people based on only “reasonable suspicion” – are enforced vigorously. Isaac is hacked off by the number of the times he’s been stopped, while much like Tony and Maria in West Side Story, Naomi meets her future boyfriend Lucas (Elliot Cable) at a dance – someone who isn’t black. By today’s standards, that isn’t such a revolutionary thing, but at the cusp of the Eighties it wasn’t so common and in the context of the times, a defiant gesture against the “Rivers of blood” speech MP Enoch Powell made just over a decade earlier.

Even though Windrush Square doesn’t shy away from all the bad things happening at that time, there is a lot of humour present and a physicality to the performances. Sometimes this takes the form of stlyised, choreographed sequences and sometimes ‘all-out fun’ with music and dancing. It’s worth noting, however, while these moments of levity and mirth are entertaining, the way they are juxtapositioned with decade-defining incidents have a way of blindsiding audience’s expectations, giving the revelations an additional potency. 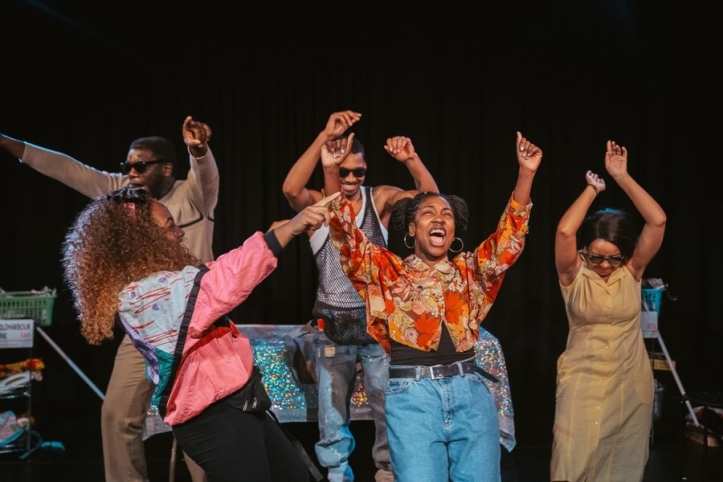 Conroy’s Joyce who has a penchant for rum often steals the show in terms of laughs, but it is the character of Elijah who has the most signficant character arc. Always one to pacify the community when ‘incidents’ take place, inch by inch, even his resolve is eroded away as escalating unconscionable acts are ‘swept under the carpet’…

Most people forget that the Royal Wedding in July 1981 took place days after riots took place in Handsworth (Birmingham), Chapeltown (Leeds), Toxteth (Liverpool) and Moss Side (Manchester). Small wonder that the No. 1 song at that time was The Specials’ Ghost Town, a more truthful reflection of the mood of the nation and a sign of the times…