Predating Sigmund Freud’s theories on psychiatry by a number of years, a book by Robert Louis Stevenson captured the zeitgeist – following Sweeney Todd’s appearance in the ‘Penny Dreadfuls’ and shortly before ‘the Ripper’ was first reported in Whitechapel. A musical based on this Stevenson novel – The Strange Case of Dr Jekyll and Mr Hyde – is the latest production by the renowned Chickenshed Theatre. An unusual idea perhaps, but no more so than Lloyd-Webbers’ Phantom of the Opera or Sheik and Sater’s Spring Awakening.

In this production of Jekyll & Hyde which is directed by Jonny Morton, the patina of Victorian London is fully realised. As the audience walks through the corridors, the walls themselves are made to look like seasoned brickwork, adorned in vintage posters. Utilising traverse staging, the audience then sits either side of ‘the street’, watching what happens outside the doors of people’s homes and the well-crafted arch/balcony at one end of the stage area. 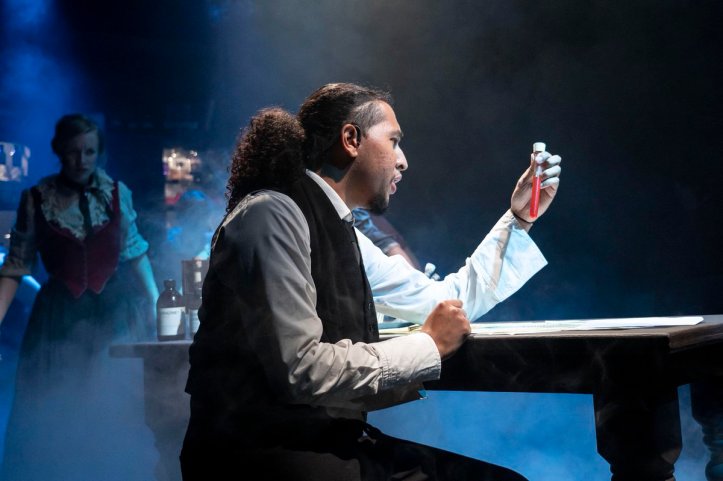 In terms of the show’s ‘book’, Jekyll & Hyde is akin to the literary origins of Dracula – ie, much of what’s shown is through the inner circle of Jekyll and the people of London, rather than the central character. This gives Jekyll & Hyde a natural emphasis on ‘the Chorus’, whose singing and choreography are one of the show’s highlights.

The score by Dave Carey and Hanna Bohlin with lyrics by Paul Morrall has a contemporary freshness to it, while the lighting and audio vision design lends the production a gothic sensiblity.

Watching the show, one releases that its core, it is about a man who is falling apart because he’s lost his sense of identity and everyone he knows is powerless to help him. A parable, if ever there was one, for seeking help with our inner demons.