In plays as well as fiction in general, the seaside is a place where the past and present collide – the ebb-and-flow of time pulls at the human heart and the erosion of life’s certainties leaves… something different. Written by Alison Carr and directed by Yasmeen Arden, the play begins with guest house proprietor Maeve (Tricia Kelly) and daughter Claire (Judith Amsenga) during one summer weekend. Following Maeve’s stroke, a decision has been made to cancel bookings for the foreseeable future. This would allow Maeve to convalesce, with Claire staying to look after her. However, the arrival of Simon (Alan Mahon) – an unexpected guest in the early hours – throws out the equilibrium of the weekend. 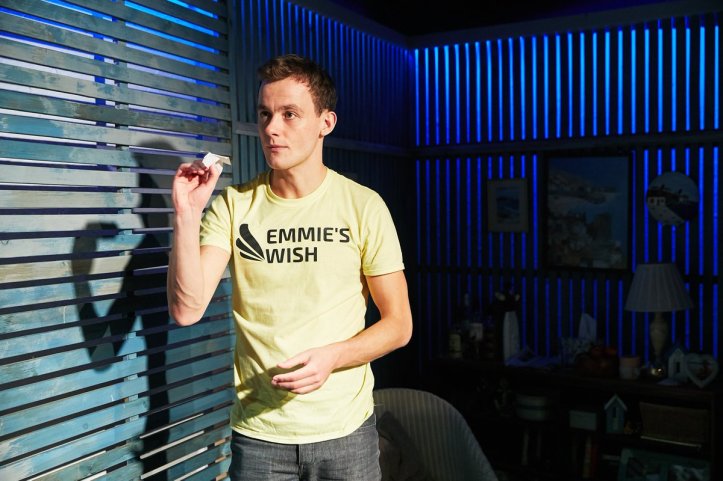 The ‘unwanted’ presence of Simon is a source of mirth in the first half – not so much from anything he says or does, but from the disparate responses from the women. The more congenial Maeve behaves, the more irritated Claire is by her behaviour. Simon’s reason for his visit – to honour the last wish of his former girlfriend – marks him out as loyal and sensitive person who is driven to action. The question of ‘motives’ though – those he tells others versus what he really feels are just as pertinent to the other characters.

Kelly and Amsenga have great familial chemstry, ying to each other’s yang and oscillating between the roles of ‘parent’ and ‘child’. However, their relationship raises a subject that’s seldom explored on stage and one of society’s taboos.

The title of Carr’s play is no accident and if we compare how the characters are first portrayed to their ‘true colours’ in the second half, we see an evolution from the ‘caterpillars’ to ‘butterflies’. Not that the ‘before’ and ‘after’ are as different as night and day. Rather, details of their respective personalities are hiding in plain sight, but once displayed in ‘full bloom’ cannot be ‘unseen’.

As for the set design by Holly Pigott and Ben Jacobs’ lighting, like a Monet painting, they convey completely different moods and psychological states, depending on the time of day.