One of lesser-known abilities of the heroine in the original Buffy The Vampire Slayer movie was to sense the presence of the Undead through her menstrual cramps. Far from being ‘the Curse’, the most feminine (if uncomfortable) of experiences was a ‘super power’. While not quite in the same ball park, Kate Kennedy’s show Hunch takes a similar approach to viewing the ‘ordinary’ as ‘extra-ordinary’.

Una doesn’t like making decisions, especially if her choices will affect other people. A fateful decision to leave a building before disaster strikes leads others to suppose that her ‘gut instincts’ make her ‘gifted’. It’s not long before word travels and Una’s asked to join an elite group who are also ‘gifted’… 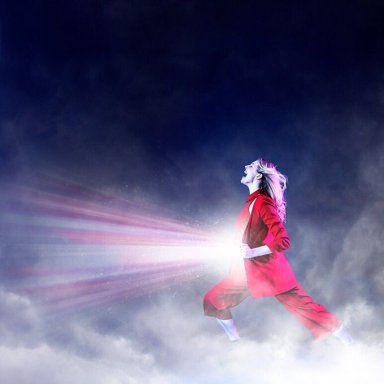 As a one-woman show, the onus of Hunch is firmly on the ‘mundane’ and the absurdity of Una’s situation. The reactions to Una’s status by each of her parents are both funny and truthful – torn partly between being in awe of her, yet knowing deep down she’s the same person they love with the same emotional hang-ups.

Under Sara Joyce’s direction, Kennedy’s delivery is both engaging and unpredictable, weaving in between witty observations and recognition of the ‘surreal’ nature of her situation. ‘Powers’ as a metaphor for personality traits is nothing new and in the case of Una’s ‘gut reaction’, her uncomfortableness prefaces a need to decide, a need to act.

In a world where ‘facts’ are relative and ‘fake news’ is prolific, who will help make the ‘right’ or tough decisions? Of course, Una’s ‘ability’ is something we all have, but because of her clarity or willingness to act, we see in the play people reliant on her – gladly relinquishing responsibility for decisions they should make themselves.

Of course a “hero’s” greatest possession isn’t whether they can fly or have a utility belt. It is their ability to chose, their ability to know – regardless of their misgivings – what needs to be done.