The Odyssey by Homer is one of the great epic sagas of Ancient Greece. Unlike other contemporary ‘heroes’, Odysseus wasn’t celebrated because of how strong, swift or brave he was. Instead, it was his intelligence and cunning that was brought to the fore. And while he didn’t have the universal support of the Olympian gods, Athena – the goddess of wisdom – had his back, for in many ways they were kindrid spirits. Ragnarok Productions has taken the Herculean task of adapting Homer’s Odyssey, and successfully presenting it as a succinct, hour-long production. 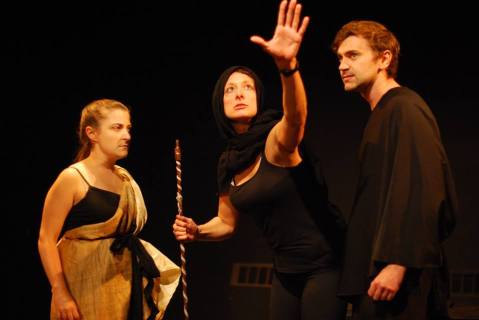 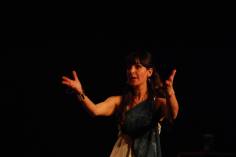 There are a number of things that distinguishes this particular adaptation. Firstly, the onus is firmly on Penelope and Telemachus (Odysseus’ wife and son) who having waited 10 years while the Trojan War raged, also have to wait another decade for him to come home. As in all tales that directly or indirectly deal with war, the most interesting perspective is often from those who don’t have a say in the state of affairs. In the case of Penelope, she’s plagued by suitors, much like Elizabeth I experienced during her life. Heaven forbid that a woman should reign alone… While the highlights of Odysseus’ travels are referenced, there’s an economy to their use, showing just enough to give an inkling of his strengths and weaknesses. Alas, we see Odysseus’ moment of hubris which resulted in the 10-year extension of his travels…

In terms of techniques used to tell the story, physical theatre’s sometimes used (as in the case of Christna Closs playing Polyphemus the Cyclops) – evoking of Shakespeare’s Caliban. Of course, this cements the notion that The Odyssey’s DNA runs in many maritime fables, from Daniel Defoe’s Robinson Crusoe to The Tempest. Shadow play is also used effectively, when Odysseus visits the Underworld and speaks to ‘the Shades’ who may or may not have news of his family back home. 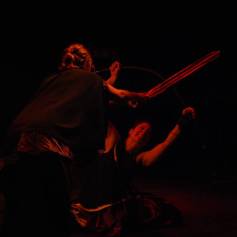 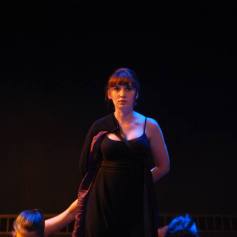 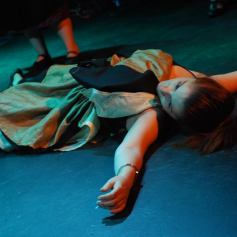 As most of the theatre company are female, there are no ‘token female’ roles in the production and when conversation turns to the will of Zeus the king of the gods, we sense that his ‘position’ stems from his might, rather than any moral authority. Besides, Zeus isn’t omnipotent, so there are ways around his edicts…

When tackling tales from antiquity, there is a similar issue when putting on Shakespeare: how do we keep to the essence of the narrative, but make it accessible to modern audiences? Ragnarok Productions doesn’t try to reinvent the wheel, but what it does do is adhere to clear storytelling and keeping the focus on the characters’ desires and emotions.