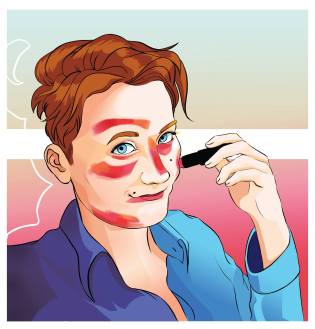 When broaching the subject of transgender dysphoria and gender identity, it’s possible that not everyone will understand what this entails – either intellectually or from an emotional perspective. However, performer Miranda Porter has found a novel way around this conundrum. Utilising slapstick and physical theatre, Porter wordlessly and succinctly conveys the disparity between mind and body.

When the show begins, Porter enters the ‘office’, dressed in standard ‘male’ attire – a suit with accompanying shirt and tie. As the show progresses, Porter starts to rearrange things around the office to a personal preference: paper, pens – even the time of the clock. It is the unveiling of a torso image, however, that everything falls into place. A photo that wouldn’t look amiss in a men’s fitness magazine, the ‘headless’ torso with pronounced abdominal muscles in a pair of boxer shorts stands there with ‘attitude’. While it’s obvious from the off that ‘Porter’ likes the photo, we realise very quickly that this isn’t a visual, hetero response to the image. ‘Porter’ wants to BE this person… with a ‘flat’ chest.

While Porter adorns short-ish hair, there’s no getting around the fact that secondary female sex characteristics (ie breasts) are present. What can be done to reach the ‘ideal’ body image of the advert?

Much of the second half of the show involves Porter’s inventive approach to look like the hanging picture, ranging from the ridiculous to the sublime. However, while I was watching the show, I also observed how the women in the audience really responded to this. As well as being an intimate part of their lives, breasts can also be ‘a thing apart’ for women, who every day debate whether how and should they be hidden from sight – sometimes successfully, sometimes not. The women in the audience really empathised with Porter’s predicament, though the more ‘extreme’ measures later induced a response akin to men’s reactions with trouser zips.

Because of the natutre of S/he/it Happens, it works on many different levels and in some ways the audience will bring ‘their own baggage’ to how it’s interpreted. One can see parallels with the quest to look ‘beach ready’, as adverts often tell us. However, in terms of the show’s conception, it owes its inspiration as a reversal of Pedro Almodóvar The Skin I Live In – only the ‘subject’ in question is in control of their metamorphosis.