Twenty Theatres To See Before You Die – Book Review 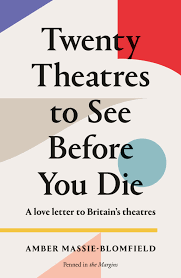 For those of you who attend the theatre on a regular basis, there’s bound to be some venues you visit more than others. Maybe it’s because of their repertoire. Maybe the venue has an interesting structual aesthetic. And maybe – just maybe – it’s to do with its history and importance to the community at large. Can you narrow them to 100 in the UK? Fifty? Twenty? In trying to give some sort of answer, Amber Massie-Blomfield has travelled the length and breadth of the British Isles to follow-up on the suggestions others have given and see… no, EXPERIENCE these theatres so that she can appreciate them first-hand. These experiences are collated to form her book Twenty Theatres To See Before You Die. Frankly, I’m envious of her. What better way to spend one’s free time than to travel around the UK, and meet the people who run the venues in rural and urban communities. For most that do so, it isn’t a ‘job’. It’s a vocation, a calling. Something one is compelled to do…

The first venue that Massie-Blomfield visits is The Minack Theatre in Porthcurno, Cornwall. Talk about a theatre for the community. From the off we are introduced to Rowena Cade, who almost single-handedly built a theatre on a cliff-face. It was to be her life’s work.

With every theatre introduced, Massie-Blomfield sets chapter openers with epigraphs made up of unusual items in the section that will pique the reader’s interest. Rather than launch straight into talking about the respective theatres, Massie-Blomfield takes her time setting the scene. If the venue’s structure or surroundings are of historical significance, this may be elaborated upon…

In any case, pertinent aspects of the previous chapter find their way later, and we see that beneath Massie-Blomfield’s ‘casual’ writing style, there’s much more forethought than a ‘casual’ glance would reveal. References are often made to other writers such as John Berger, whose insights on history, culture and the human condition permeate the book directly, if not in spirit.

As you would expect, some of the venues such as the Theatre Royal Bath are opulent, visually-arresting and hail from the 18th Century – the ‘Golden Age’ of theatres. Then there are other, modern examples that are breathtaking in their own way such as the Liverpool Everyman that also manage to be utilitarian in every way possible and cater for all members of the community. And then there are institutions such as the National Theatre of Wales who have borrowed a leaf from the Edinburgh Fringe Festival and utilised any and every building to host shows, literally bringing theatre to the community.

The common denominator in all the ‘theatres’ is that their progenitors and the staff who currently run the ‘venues’ have an unquestionable dedication and truly believe that the theatres they work at deserve nothing less than 100% of their energy and passion. In their estimate, the value of their respective theatres in the community is incalculable.

Back in 1960, John Steinbeck made his odyssey across the United States, to reacquaint himself with a country that had changed since his youth. Massie-Blomfield, in her own way has made a similar voyage of discovery. But just as Britain has so many regional accents, and each town and village has a rich reserve of folklore and history, so Massie-Blomfield takes pleasure at a leisurely pace chronicling the idiosyncrasies of these places and how theatres came to be established there.

Of course with a book like this, one may hold a different opinion about the selection and think that many others should make the cut. I dare say many other venues should be singled out for their ‘uniqueness’ and value to the community. While Massie-Blomfield’s book could be erroneously interpreted as a list of the ‘best’, it only takes a perusal of one chapter to see that the book is a love letter to all theatres and the people who run them.

Twenty Theatres To See Before You Die doesn’t read like a dry, academic tome. Like theatre itself, it’s personable, has something to say, and as much a critique of the past as a gauge of what is yet to come.

Twenty Theatres To See Before You Die is published by PENNED IN THE MARGINS and available now.