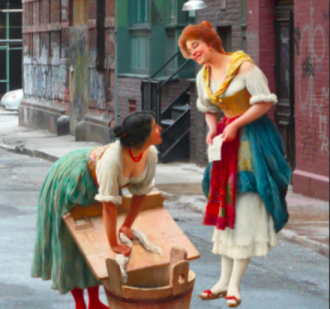 Most people know about matryoshka/ Russian nesting dolls – a set of wooden dolls of decreasing size that are placed inside each other. In some ways this is a perfect metaphor for the women in The Laundry – all self-contained figures in their own right, but begetting each other, physically and emotionally.

Following the matriarchal bloodline (à la the Brangwens in DH Lawrence’s The Rainbow), The Laundry begins with the lives of sisters Ava and Anina. Living in Stalinist Russia, the girls are sent away by their mother in the hope they would be safe and a have a better life. Alas, their circumstances are anything but, as they are rounded-up to work in one of the Gulags (Russian labour camps, often used to house prisoners). Anina’s favour with a guard secures the comparatively less arduous job of working in the laundry, but there is a downside to this attention…

The events in Russia are viewed through the prism of the present, with Ava as an elderly lady, living in a care home. She receives a visitor and in her befuddled state, thinks it might be her estranged daughter. But while the young woman who stands before Ava looks familiar, neither has the true idea of the ‘bigger picture’…

The inception of The Laundry is unusual in that its narrative is interwoven from three separate plays by Audrey Thayer, Nicole Palomba and Brandon Force. Under Tracy Collier’s direction, the play doesn’t feel disjointed, though the second half does veer into a very different direction.

Fiona Watson plays Ava, the family’s matriarch, during her mature years in the ‘present’. Through her we sense that the past is never more than a thought away, and that it is only through her act of will that has kept it from having a grip in the here and now.

Playing young Ava and young Anina respectively, Verity Williams and Nicole Palomba are the sisters whose day-to-day existence is marked with hunger and destitution. While Anina is the elder and in her own way sacrifices much for their well-being, Ava in some ways is the more pragmatic of the two – or at least less ‘sentimental’.

It is, however, as ‘Hannah’ and ‘Anna’ that they truly represent very different people. Palomba’s Anna is confident, outgoing, and has no problem expressing herself. She also makes a big point of trying to engage with her Russian heritage, which as a UK resident she feels cheated out of. Meanwhile, Williams’ Hannah has a quieter disposition, but no less adventurous in travelling the world and we see first-hand how her relationship with ‘the family’ impacts on her marriage. With both women, questions are raised regarding ‘nature’ versus ‘nurture’…

And then there’s Andrew Hodson. A lesser talent playing a variety of male roles might be unexciting or lacking distinction, but every role he played has a degree of versimilitude, grounding the play.

It is, however, in the second half of the play where we see the indivisble nature of the womens’ lives. Borrowing the tone of Deborah Levy’s Pax, past, present and future come together at a nexus. Memories and feelings of the past are very much ‘present’, but if you could speak to those who are ‘absent’ to find closure, what would you say?

The Laundry runs at Drayton Arms Theatre until 21st July.