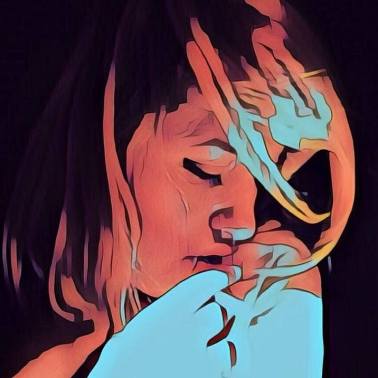 Stacy (Phoebe Thomas) likes nothing better than having a night out (who doesn’t?) and spending time with her best friend Stella (Velilie Tshabalala). Conversely, Stacy’s idea of having ‘a quiet night in’ is to spend the evening down the White Horse pub. But there’s nothing wrong with going out all the time… is there?

So begins Daisy King’s NOF*CKSGIVEN, which premieres at King’s Head Theatre. Directed by Laura Woolf, King’s debut play addresses issues that hide within plain sight. Stacy is a fun-loving character and never short of company. Full of confidence, she can match the most cocksure characters with banter and her ‘drinking prowess’. But if there’s anything that makes her weary or ‘afraid’, it’s the possibility that she may be left ‘on her own’. There is a physical ailment, a “stabbing feeling” in the chest that periodically manifests, but the reasons behind this become apparent over time.

The early part of the play obfuscates these ‘difficulties’, concentrating instead on the men Stacy meets (which are all played by Gaz Hayden). There’s Dave the West Ham supporter and plumber who she would like to “see to her pipes”. Then there’s the actor Andy Serkis (at least that’s who she thinks he is…) and Stella’s boyfriend Joey. There’s also “Psycho Steve” who doesn’t make an appearance, but is talked about on several occasions. The one thing all the men have in common is there is more to them than meets the eye – or at least more to their story than how they are first talked about.

A piece of good fortune for Stella – a job promotion “up North” – brings into focus a topic that hasn’t directly been talked about. Forgetting for a moment Stacy’s ‘drinking prowess’, we realise that not only does Stella know about Stacy’s other ‘escapades’, but that ‘Christine’ – someone who we hear in passing doesn’t approve of Stacy’s behaviour – isn’t a ‘prude’ or a ‘killjoy’ but someone who she has to ‘report to’… Without Stella’s steadiness to keep her in check, what will become of Stacy..?

NOF*CKSGIVEN steers away from making judgment calls about Stacy, but it doesn’t shy away from the more ‘complicated’ aspects of her behaviour or from asking questions about how anyone – male or female – can be ‘reached’ when they haven’t an ‘epiphany’.

Originally developed from a 10 minute short, NOF*CKSGIVEN still has a rawness and vigour that comes from the joy of learning one’s craft. At just under an hour long, there’s scope to develop it further, to flesh out the ‘non-socialising’ side of Stacy’s life and trace how long she’s been avoiding certain questions.

NOF*CKSGIVEN runs at King’s Head Theatre until 12th May.