Worth A Flutter, Hope Theatre – Review

Boycie: Where d’you get those aces from?
Del Boy: Same place you got those kings. I always knew you were cheating, Boycie.
Boycie: Yeah, how?
Del Boy: ‘Cause that wasn’t the hand that I dealt you.
Only Fools And Horses

Anybody who has seen EastEnders since its inception knows how important “the caf” is to the community. Second only to the pub in importance, ‘the salt of the Earth’ rub shoulders with all and sundry over a bacon sarnie and a mug of tea. In Worth A Flutter, which is written by Michael Head and directed by Jonathon Carr, one man finds there what he thinks is the answer to his unhappy love life.

Matt (Michael Head) admits that his present relationship with girlfriend Paige (Lucy Pinder) is something that happened by chance, rather than by design on his part. As she’s someone who under normal circumstances would be out his league, Matt’s not questioning why Paige has decided to stay with him for the time being. Alas, Matt and Paige don’t have much in common with each other and like the lyrics of When You’re In Love With A Beautiful Woman, he’s only too aware that others would take her off his hands if they could.

Cue Helen (Clare McNamara). The proprietor of the local cafe, she’s down to earth and easy to talk to. She also has a dry wit which Matt warms to and the more he thinks about it, the more her personality fits his picture of the ‘ideal woman’. But women like Paige don’t grow on trees. Is it possible for Matt (who’s not really a ‘ladies man’) to juggle two women at once?

Now he had become the still centre of that spinning wheel of misfortune. The world turned ’round him leaving him miraculously untouched. – Croupier (1998)

Much of Worth A Flutter is played as a comedy and while the humour stems from Matt’s love life, nothing is quite what it seems. Also, in terms of the honesty of the characters, everything is relative. In contrast to Matt, there is his friend – or rather ‘acquaintance’ – Paul (Paul Danan). Perenially popular with the ladies, Paul has never had to ‘work’ at relationships and in the past, he’s allowed Matt to have his ‘leftovers’. While Matt personaly doesn’t trust him, he’s the only person he can talk you about women. Of course, it galls Matt that Paige spends so much time with Paul… 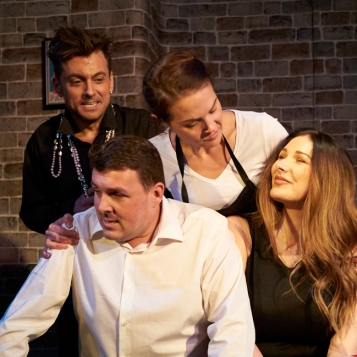 So how does Helen feel about Matt? The first half of the play shows her behaving in one particular way, but the introduction of Sam (Jack Harding) – another sympathetic ‘suitor’ who is also in an unhappy relationship – throws a completely different light on the situation. If there’s one thing that this play is good at, it’s subverting expectations and showing that if you dig deep enough, everyone has a chequered past – all done for very personal reasons.

Much of Worth A Flutter‘s charm lies in the self-deprecating nature of the play’s narrator, Matt, and the nuances of Head’s own Bermondsey roots. Matt’s observations about dating (plus Sam’s) and the absence of true friends to confide in highlight the conditioning from an early age of how men relate to each other and the opposite sex.

While much time is spent waxing lyrical about Helen’s qualities, McNamara’s wry, understated performance sells the interest shown in her and makes her later revelations all the more unexpected and poignant. Worth A Flutter may at first appear be Matt’s story, but its emotional heart belong to Helen’s. Of course, she isn’t the only woman in the play to spur the men on… 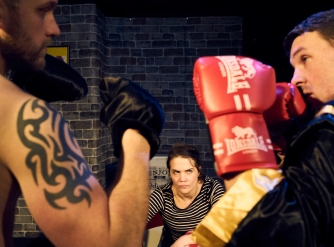 Following a successful modelling career and foray into television and film, Worth A Flutter marks ­­Pinder’s stage debut. Asides from her portrayal of ‘bang tidy’ Paige, she also plays Sam’s wife, Emma, who finds it hard to be listened to and vice versa. She also shows a talent for comedy, memorable in the play’s “What not to say” race and as Matt’s Scottish ‘appendage’. Whether it’s light-hearted banter or delivery of a more serious nature, Pinder shows she can step up to the plate with whatever the material demands.

Danan has a lot of fun playing larger-than-life characters ‘Paul’ and Mr Edwards – the neighbour who Matt aptly points out is a “character”. While Paul’s ‘stud’ status shows how some men would behave if they had ‘good looks’ that led to ‘women on tap’, it’s as ‘dirty old man’ Edwards – a randier version of Albert Steptoe – that indirectly highlights how differently Helen views Matt from Sam.

Last, but not least, Harding’s Sam with his backstory shows how even nice guys can upset the ‘equilibrium’ of a play and divide the loyalties of an audience. Not as common as you might think. The ‘boxing match’ imaginatively conveys the rivalry between them, and how much ‘harder’ this is when both are essentially decent blokes.

Worth A Flutter runs at the Hope Theatre until 19th May.