It has once been said that constant talking doesn’t equal communication. But if this is the case, what are the limits of body language and intuition? Conversely, can any relationship survive if there isn’t any meaningful conversation?

Written by Mike Bartlett and directed by James Hillier, Not Talking is an intergenerational tale that’s both intimate and far-reaching. James (David Horovitch) and Lucy (Kika Markham) have been married since shortly before the Second World War. Sociable since he was a child, James has always been naturally talkative, happy to hold a conversation with anyone. Lucy, meanwhile, isn’t naturally gregarious, but she’s happy for the most part to go along with whatever James suggests. While they’ve never been the most talkative of couples, the miscarriage of their one-and-only child irrevocably cuts off the lines of communication between them.

Following the outbreak of the war, when most young able-bodied men were conscripted, James goes to speak to Lucy about registering as a conscientious objector. Seeking approval from Lucy, she makes it clear she doesn’t want to talk about it. And while she says still loves him, James senses no palpable warmth beneath her words. He’s successfully argues his case as a conscientious objector in court, but it is an experience he’s had to face by himself. That is, until he meets Susan at the proceedings…

Throughout the play, James and Lucy’s respective points of view are conveyed via their successive “He said/she said” dialogue. While they talk about the same things in general, their conversations aren’t seamless and we catch on quickly that not only are they not in sync with each other, their perspectives are very different. Sometimes they talk about different aspects of the same incident, conveying what the respective character thinks is the most important aspect of the tale.

Bartlett is a master of understatement and so often the important thing in the play’s dialogue is what ISN’T said. Add to the fact that Lucy and James come from a time when there were fewer ‘colloquialisms’, but conversely less ‘direct’ speech, they epitomise the British ‘reserve’.

In contrast to the conversations of yesteryear, we have Mark (Lawrence Walker) and Amanda (Gemma Lawrence). Both stationed at the same army barracks, Amanda thinks there’s something different about Mark that separates him from his peers – the absence of loutish bravado… someone with a brain who doesn’t follow the herd mentality. As one of the few women on the base and who has publicly rejected the advances of ‘the lads’, Amanda’s no-nonsense stance earns her the ire of officers and privates alike. In an environment where standing out is frowned upon and following orders is non-negotiable, both Amanda and Mark find themselves in an impossible situation, where at speaking out at best leads to being court-martialed and at worst…

Bartlett draws out futher parallels and differences by having Mark and James share the stage – the soldier and the pacifist – and also Lucy with Amanda. In the case of the men, apart from the obvious differences, the notion of intervention is explored and true strength and bravery – to stand and be counted when people in authority tell you you’re wrong. With regards to the women, they both share a sense of being silenced and unable to find their ‘voice’. In a very real sense, Amanda is like Lavinia in Titus Andronicus, but through the same piece of music by Chopin, they are able to wordlessly, unequivocably convey their emotions.

The play doesn’t shy away from the double standards that society places on ‘communicative’ people and how times have changed. Once, a person who gave measured responses, who wasn’t a ‘chatterbox’ was considered ‘deep’. However, popular opinion has swung the other way now. Even Mark’s mother in the play doesn’t think he’s a “brainbox”, the assumption being a quiet person doesn’t have “much going on up there”. 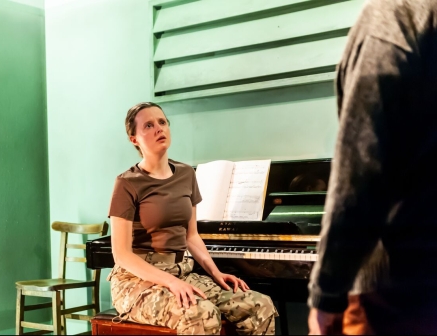 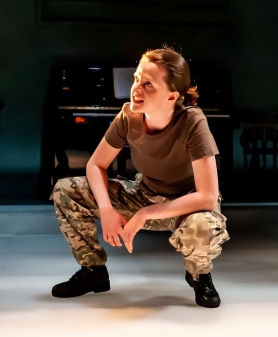 The observations and insights that Bartlett injects in No Talking have an accumulative effect, so that by the end of the play, we see the ‘magnitude’ of the absent conversation. But as the play points out, while comfortable silences are a hallmark of a close relationship, if the silence is one-sided, it can be excruciating for the person who wants meaningful conversation. In a world where so much emphasis is placed on expressing oneself, silence can be deafening.

Not Talking runs at Arcola Theatre until 2nd June.