The Second World War saw many suffer and treated inhumanely, and for anybody who made it through the concentration camps, there was cost to their survival. Based on Anneliese Kohlmann’s Belsen trial transcript and Holocaust survivors’ testimonies, Under The Skin tells the story of a Jewish ballet dancer who attracts the ‘patronage’ of a SS guard at the Neuengamme concentration camp. But rather than delve straight into that part of the story, the play is framed by events in 1991.

Charlotte Brod (Adi Loya) is not accustomed to having visitors. Not because bomb attacks occur frequently near her home in Tel Aviv, but because she doesn’t actively seek company. However, Kirsten Eberhardt (Natasha Lanceley) – a young and persistent German journalist – turns up on her doorstep with conclusive proof that she is fact Lotte Rosner, a dancer of some repute who resided in wartime Prague… 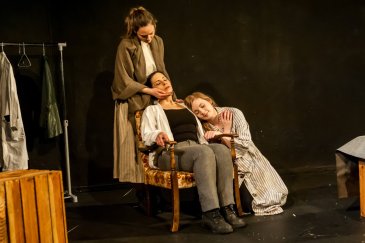 While Cordelia O’Neill’s No Place For A Woman also features a Jewish ballerina at the close of the Second World War, Under The Skin takes a different tact. Asides from being based on real events rather than a work of fiction, Kohlmann – the SS officer Lotte has a relationship with – is a woman. Had their affair been publicly known, Anneliese’s sexuality would have been automatic grounds for incarceration. Of course, Lotte’s friend and fellow prisoner Ida (Batel Israel) views Anneliese with suspicion and would rather go without, than eat anything that comes from her.

Under The Skin is full of ‘small moments’ that are actually quite telling. When asked for her name, Lotte responds with the number she’s been allocated for the camp – a ‘non-person’. It’s only when they’re able to call each other by their true names that they’re able to transcend the ‘roles’ that the camp places them in. Language also provides gallows humour, as an order to Dr Schmitt the camp’s doctor to “Take care of her” in the literal sense is met with perplexion. 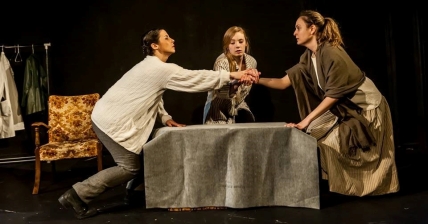 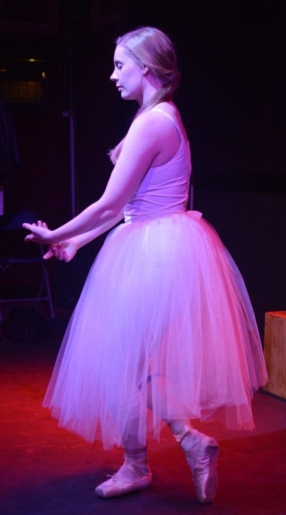 While Kirsten’s presence frames the play, her own past and arc sheds further light on Lotte during the last days the war and indirectly poises the question of ‘the quality of mercy’ following the Allied liberation of the camps. Also, far from being a disinterested young person, Kirsten – like many countrymen her age – is ready to face the past head-on, without apology. Of course there is a part of her that fears what answers she’ll find, but that won’t stop her…

Under The Skin runs at Old Red Lion Theatre as part of a female-led double bill with Is This Thing On? until 31st March.